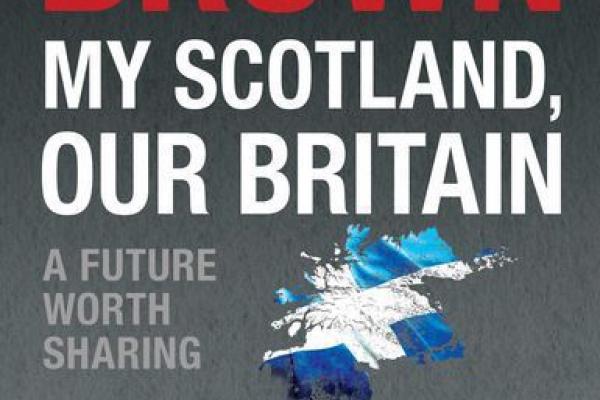 A Tour Inside Gordon Brown’s Britain

Gordon Brown in recent times has increasingly recognised that something is wrong, even rotten, in the state of Britain, regularly talking about ‘a dysfunctional UK’. This is part of Brown’s continual manoeuvres post-2014 to have a say in the future of Britain’s constitutional arrangements and to make the case that the status quo increasingly ill-serves the nations and regions of the UK.

Thus it comes as no surprise that he has taken pen to paper and written a substantial New Statesman essay that makes his case of what is wrong with the UK, updated for COVID-19, containing his argument and proposals for far-reaching constitutional change.

This is the latest incarnation of Gordon Brown who has gone through several distinctive political phases. There was the young, iconic firebrand phase of ‘Red Brown’ in the 1970s, and then the rising star in the 1980s of ‘Kinnockite Brown’ where, under the Labour leadership of Neil Kinnock, he forged a partnership with Tony Blair to make the party electable. Then followed the summit of this in ‘New Labour Brown’ where he and Blair succeeded in remaking the party as one which won elections and governed from the centre; and overlapping with this emerged ‘Union Jack Brown’ in which he saw the need to reclaim Britishness for the progressive cause and in light of devolution and a politics of four nations in the UK.

Previous Browns, and how people see his journey to this day, are not surprisingly significantly clouded by whether they are sympathetic or antagonistic to Brown as a politician and person. Brown divides people and particularly so in his home nation of Scotland. For one, ‘Red Brown’ in the 1970s was not that radical by the standards of that decade’s student and youth radical politics. The exception is his period as Rector of Edinburgh University where he effectively terrified the institution’s establishment, forcing them to disinvest from apartheid South Africa.

Take Brown’s editing of his first book, ‘The Red Paper on Scotland’ that was published in 1975 – with 29 contributors who were all men. His contribution cites all the usual suspects of the age – Freire, Gramsci, our own Tom Nairn – but beyond the rhetoric it proposes little to nothing in the way of substance. In this Brown, was at an early age, already in the slipstream of traditional Labour figures who talked vaguely left on the way up and in opposition, and when in office acted conventionally.

The New Statesman piece is one of the most comprehensive produced by Brown on the need for change and thus should be treated seriously. Leave aside that Brown has no formal power beyond the power of persuasion to bring about what he is proposing. In the article he talks of centralisation and failures of central government during the COVID-19 pandemic, and the limitations of the devolution settlement, of which he was a leading champion, being further revealed.

Brown comes nearer than ever to admitting that he might have made some mistakes when he was in office for thirteen years, conceding in the specific area of co-operation between the devolved nations and the UK political centre that: ‘Those of us who were in government should hold up our hands: not enough thought was given to the mechanisms for co-operation when devolution was implemented.’

Yet Brown still clings to a view of the UK which is completely detached and lacks, at least publicly, any element of self-reflection of his period in office, its record and how he did his politics. Thus he actually writes without any element of irony or qualification that ‘”command and control” only takes you so far’ – and that ‘SW1 clings to the myth that the man in Whitehall knows best, when in fact closer to home in the regions know better.’

He writes about the bully pulpit nature of the UK Premier: ‘A Prime Minister has to consult, communicate and co-ordinate, and build consent, for if trust breaks down and if, as the antics of Dominic Cummings demonstrated, there are doubts about the credibility, legitimacy and even-handedness of the rules, then any hope of unity disappears.’ All of these noble sentiments, without one word on the limits of the Brown Premiership of such qualities.

There are good suggestions in this but overall – despite Brown’s recognition that the political arrangements of the UK are no longer adequate, properly democratic, and are in fact regressing – it is not Brown’s impatience and desire for deep seated reform that stands out. Rather, what underpins this, along with all of his constitutional contributions since Labour lost office ten years ago, is the limited nature of what he is proposing – and his obstinate clinging to conservatism.

Take the specifics of what Brown in late 2020 is suggesting – as we face a cliff-edge Brexit deal or no deal, the impact and pain of COVID-19, the cumulative effects of ten years of austerity, and a Scotland, Wales and Northern Ireland shut out from the corridors of Westminster. For all the language of remaking Britain and its politics and need for decentralism, this is still a language and values of ‘devolution’, writing that the UK needs ‘to develop a devolution mindset’.

What devolution means is the politics of the centre deciding what powers and arrangements can be distributed and remade, but with real power remaining at the centre – and with the prospect of taking it back or curtailing it when it feels threatened. If people think that is worrying too much about semantics, the Conservatives have through the ages seen the British constitution as their own political property – whether near civil war over Northern Ireland in 1911-14, the abolition of the London County Council in 1964-65 and Greater London Council in 1986, and taking out the entire tier of Scottish regional government in 1994-95: all putting party above democratic considerations.

Brown proposes all sorts of wheezes – such as an elected Senate of the Nations replacing the House of Lords, and a Council of the Regions and Nations to provide an over-arching UK settlement and co-ordination, but what stands out is what it missing. No detail on England, and how it can break from the Whitehall leviathan and find appropriate governance. No comment on the need for proportional representation for the House of Commons. And most damning of all, no notion of any real kind of diffusing and codifying power through a federal UK – which requires detail and commitment and not just those typical warm words ‘moving towards’ or ‘closer’ to federalism, while the implications of a written constitution are just passed over.

Ten years into Labour opposition and despite everything that has happened Brown and the Labour Party still cling to the wreckage of the ancien regime, majoritarian government, the shibboleth of parliamentary sovereignty, and the mirage that First Past the Post can allow minority administrations to railroad through unpopular policies. Here Gordon Brown 2020 is at one with the arch-centraliser Gordon Brown 1997 and with Boris Johnson and the likes of Tony Benn, Jeremy Corbyn and Margaret Thatcher.

The insider political class of Britain has always believed in its own sure touch, and that it has the right to move and juggle the levers of power without too many formal checks and balances. Labour have been as committed to this as the Conservatives, seeing the British constitution, state and statecraft, as giving them unchecked power and viewing the executive as acting and embodying the will of the people. This has been one perspective which has historically united the party – being signed up to on the right of the party from Brown and Blair, and the left and Nye Bevan, Benn and Corbyn.

Brown’s British nationalism’s ‘othering’ of others

Brown’s story is often seen as a unique one, even by some as tragic – of the man who went from idealism and principle to compromise, somehow diminishing himself and his political soul. This is a misreading, for it over-emphasises Brown’s travelogue as personal and individual; over-states his youthful radicalism, and deliberately ignores the wider frame of Labour’s myopia and lack of democratic credentials historically and to the present.

Despite all his political intelligence Brown, really does not fundamentally understand the nature of the UK and how power manifests itself. To take just one key example, since leaving office Brown has been silent on characteristics of the British state – and its central organs – that have evolved under Thatcher, Major and New Labour (including one Gordon Brown) into a neo-liberal state, promoting a corporate crony capitalism eroding the values of public services and service, and especially under Boris Johnson’s Premiership have descended into a parasitical free-for-all for outsourcers and privateers.

Another long-term strand missing in Brown’s take on Britain is how he comprehends nationalism on these isles. Hence, in typical Brown language he problematises nationalism writing that ‘Nationalism must always have someone to blame, holding the “other” guilty for anything that is wrong. Nationalism divides us into us-versus-them silos ….’

Brown has written elsewhere earlier this year of the threat of ‘five nationalisms’ to the UK: Brexit, Scottish, Welsh, Ulster and Irish, missing the two dominant nationalisms, British and English, which he seems incapable of even naming. In all of this there is an implicit and often explicit caricature of Scottish nationalism. This wilfully ignores that unionism, whether in Scotland or across the UK, is a form of nationalism, and at its peak in the 1950s and before, articulated a form of ‘unionism-nationalism’, being comfortable with difference and autonomy.

Thus Brown is an advocate of British nationalism – a state nationalism which with its majoritarian claims and conceits dares to think that it is not a nationalism, but cosmopolitan internationalism and progressive. Nationalism rather he poses is petty, divisive and close to illegitimate, to be overcome and defeated. Yet, what Brown is doing in his choice language is actually ‘othering’ nationalism as being about something archaic, anachronistic and anti-modern, and not understanding the very modern variants of Scottish nationalism and appeal of self-government. In this he denies the very nature of what the United Kingdom is – and its complex mosaic.

If Brown were serious about his reformist credentials, for a start he would attempt to find a different language which was not about patronising and belittling those he regards as a threat such as Scottish nationalism. If he were to set out a critique of nationalism pre se – including British nationalism – and pose a debate about the future of the UK and Scotland which was not (as his is) faith-based and shaped by emotion as the most romantic Scottish ‘Braveheart’, he could create the terrain for a more generous debate.

This would also involve some honest reflection and element of mea culpa on the flawed democratic credentials of New Labour in office, and the obsession with command and control politics which Blair and Brown embraced – the latter both in his decade in the Treasury and as Prime Minister. He would attempt to have more of a genuine and truthful account of the long descent of Labour over many decades and its hollowing out as a party of the centre-left, solidarity and communitarianism – something not unique to British Labour but rather found across the developed world.

A Gordon Brown who honestly looked back at what he has done, his achievements and shortcomings, and spoke openly of how he and Labour down the ages has clung to the mirage that is the British Empire State – a state which was defined by warfare not welfare, imperialism not progressivism, and treating people here as subjects not informed citizens, would be a voice worth listening too. It still is not too late for Brown, but he needs to do it sooner – not just for himself, but for Labour and the state of the United Kingdom.