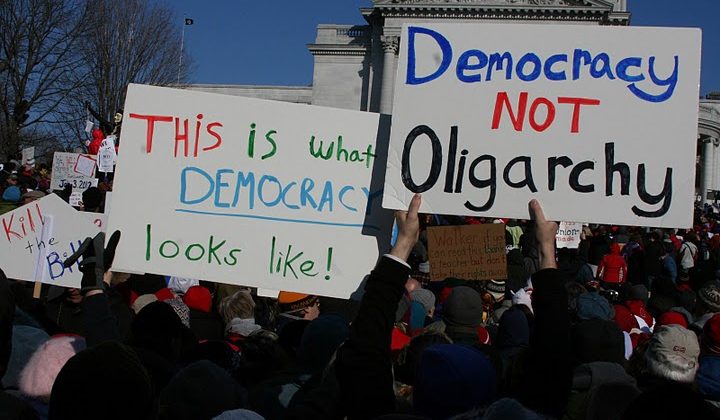 All Across the Globe: The Politics of Protest

All around the world people are protesting. Black Lives Matter have filled the streets of America. Everywhere from Canada to Australia, New Zealand to Germany, France to England and here in Scotland people are showing their solidarity with those taking a stand after the killing of George Floyd and linking it to their own specifics in a global cause.

There has never been a time in recent history when streets, park gates and public spaces across Scotland have been more festooned with home-made signs and symbols than they are now.

Meanwhile Hong Kong protesters have been marking the anniversary of the Tiananmen Square massacre and showing their opposition to the Chinese state’s imposition of oppressive national security laws on the territory.

Protesting has never seemed so widespread and urgent. But what are the best ways to make it succeed? Or is it more about celebrating the power of coming together? And what about those cynics who say protesting never changed anything and doesn’t amount to anything more than virtue signalling?

Protesting comes in many different forms, and at its core involves the power of collective action and people uniting in a common cause. It is though defined by context and has different consequences in political democracies such as the UK, in authoritarian regimes such as Putin’s Russia, and in dictatorships such as Communist China.

Decades of protest allows us to gauge what can be most effective in advanced capitalist countries. First, have a powerful case and cause such as that of George Floyd in the US and the treatment of black citizens by the police; the climate crisis, and the ACT-UP AIDS movement of the early 1990s.

Second, demands that resonate, and memorable, populist slogans can cut through and ask for attention. Think of ‘Black Lives Matter’ or ACT-UP’s ‘Silence = Death’. Third, any successful movement has to appeal beyond its own supporters. It has to target different audiences including winning over soft supporters, persuading key influencers and challenging or changing those in power.

Fourth, is the important goal of coalition building, reaching out to allies and positioning a campaign as part of something bigger. Fifth, flowing from this is the task of organisation and capacity building – including how one tackles decision making and the tricky question of how leadership is chosen or emerges.

Successful political campaigns tackle most if not all of these. But success can come in many different manifestations. It can entail winning the political argument and achieving change. Take the campaign for a Scottish Parliament. Eventually it succeeded, aided by eighteen years of Tory rule and a status quo which became unsustainable. Then there has been the long campaign for LGBT rights and equality across the West; and the pursuit of gender equality legislation which has changed attitudes and practices but not inequality.

Success can be defined as changing debate. Black Lives Matter has already achieved this; the #MeToo movement exploded after Harvey Weinstein’s grotesque behaviour became evident; Extinction Rebellion is another. All these involve building on contributions of previous campaigns and activists, and pointing out the systemic failure of those in power to change.

Protest can succeed to an extent by defining its opponents and hence limiting their actions. For example, the international marches against the Iraq war in 2003 did not stop the war. But Tony Blair’s reputation never recovered. And there is an argument that protest stopped the neo-conservative march to remake the Middle East through war led by George W. Bush which Blair signed up to.

Protesting has supposedly changed because of technology; it now being much easier to bring together instant protest and responses. But people need to be wary of short cuts.  The ‘Arab spring’ of 2011-12 was hailed at the time as the first ‘Twitter revolution’, but toppling dictatorial regimes did not turn out to be quite so easy.

The Turkish writer Zeynep Tufekci in her book ‘Twitter and Tear Gas: The Power and Fragility of Networked Protest’ observed that ‘Modern networked movements can scale up quickly … However with this speed comes weaknesses.’

Digital age movement, argues Tufekci, are good at shouting at power; what they are less good at is engaging with power in complex negotiations – which can become one of the defining points of protest once it has reached a critical mass and influence.

One thorny issue in protest movements is that of decision making and where authority sits. Many of the examples cited by radicals today, such as the US civil rights movement and the nuclear disarmament movement in the UK, drew a significant tranche of its leaders from church figures and preachers – Martin Luther King Jr. and Jesse Jackson in the US; Canon John Collins and Bruce Kent in the UK. This gave them a certain gravitas and authority – including with mainstream opinion and the media.

In recent decades the left has embraced the notion of alt decision making and fluid, non-hierarchical structures. So far, for all the claims of adhocracy they have only proven sustainable in the formative days of protest movements or in local and often short-term campaigns.

Protest entails learning from history, remembering struggles and celebrating pioneers. This has long been one of the central tenets of the labour movement which in Scotland and the UK has had a tradition of banners marking some of the key moments in working class history, including victories and also historic defeats such as the General Strike of 1926.

The writer and activist Rebecca Solnit observes that ‘we can’t see the future. We have the past.’ This gives us a host of insights and tools including ‘patterns, models, parallels, principles and resources, and stories of heroism, brilliance, persistence, and the deep joy to be found in doing the work that matters.’

Political insiders and the establishment have long dismissed the power of protest. There is the old argument that protest never changed anything – which flies in the face of evidence everywhere. This is the case put forward by Iain Martin of The Times, when writing that ‘Marches, generally, are not news – they are attended by obsessives’ and that he ‘Can’t stand marches or mobs – conservatives generally don’t march, too embarrassing and tend to be busy.’

It is true that conservatives historically have not tended to march – the Countryside Alliance in the UK or the Chilean middle class protesting against the left government of Salvador Allende being exceptions. Insiders like Martin are uncomfortable with those who challenge the system, but the disdain they show says something else – about how the feel threatened by the politics of disruption and how it might question any influence they have.

Yet the effectiveness of protest has to be open to self-criticism. One perspective came from Nick Srnicek and Alex Williams in their ‘Inventing the Future’ that addresses the radical politics of tomorrow, and in which they define much of the left’s actions and values as shaped by a ‘folk culture’. They then state that ‘If we look at the protests today as an exercise in public awareness, they appear to have had mixed success at best. Their messages are mangled by an unsympathetic media smitten by images of property destruction—assuming that the media even acknowledges a form of contention that has become increasingly repetitive and boring.’

Michael Gecan, Chicago-based community organiser for over fifty years, assesses that too many left and progressive causes are defined by ‘re-enactment scripts’ that draw from a diminishing well of the past and are really about the self-validation of those taking part. He acknowledges that such repeat rituals have their place, but can end up playing to a narrow cast of true believers and have a self-righteousness that fails to convince the non-converted.

Gecan came to Scotland just over a year ago to work with community groups and in a scanning of our political landscape found much to admire but noted displays of some of the characteristics of his critique. He sensed a gap at the heart of the independence movement – one where the mismatch between those with official power and those without was growing and that the understandable impatience of a growing protest movement was leading to ‘re-enactment scripts’. This was admittedly before the big All Under One Banner (AUOB) marches of last year, but Gecan’s thesis is persuasive.

This might become a golden era of protest. All around the existing order –economic, social, cultural – is crumbling and in crisis. At the same time the limited democracy which has come to define formal party politics across the Western world has been shown time and again to not be up to the challenges we face. The respected sociologist Colin Crouch even coined a term for it: ‘post-democracy’ – the collusion of political, business and corporate media elites to restrict the democratic impulse which he believes the US, even pre-Trump, and the UK have been outriders of.

Such an age requires that we take stock of where we are, celebrate successes and strengths, but note the entrenched self-interest of power and the conservatism which characterises parts of the left. An element of the radical imagination is forever stuck in oppositional battles or being sectarian happier fighting other elements of the left: an example being the Socialist Workers Party role in the anti-Iraq war movement and ‘Stop the War’ coalition which brought organisational nous, but a politics of cliché and sloganising.

The politics of protest requires drawing from the rich resources of our past, of remembering the achievements and victories, but constantly adapting and renewing, finding new ways of protesting, organising and giving voice and visibility to our agendas.

The status quo is rotten to its core and beyond incremental reform. But we should have learned the limitations of completely oppositional protest and that of traditional revolutionary politics which invokes its own hierarchies as rigid and oppressive as the capitalism it seeks to overthrow.

Transformative politics will be the future. We have seen in the late 20th century and early 21st century the failure of the moderate left as well as the top-down revolution of corporate capitalism whose damage to humanity and the planet we are still living through.

The ongoing George Floyd protests in the US have had an impact previously unseen in the Trump era. That is because unlike three years of anti-Trump protest they have not been about Trump, but something more tangible – the original, founding sin of the USA namely the legacy of slavery and open wound of racism.

Dahlia Lithwick summed this up in Slate, first of all saying about Trump that ‘Protesting a symptom occupied us for a while’ and then concluding ‘But protesting the sin itself is what has finally brought people to the streets, in a sustained and combustible way. Why bother protesting a reality show when reality itself is a daily nightmare?’

Rebecca Solnit has written that for the energy, drive and dynamism of protest to have an enduring impact ‘people have to believe that the myriad small, incremental actions matter. That they matter even when the consequences aren’t immediate or obvious’ and that they feed into something bigger which is more than the sum of all the small parts.

Protest has changed the world and is doing so in the here and now. We have to believe and act as if we can make this world a place free of racism and oppression unscarred by the inequities and injustices of the present, but that requires preparing for the long haul, organising, mobilising at local and national level, and having a focus, discipline and determination to win in practical politics and the battle of ideas.