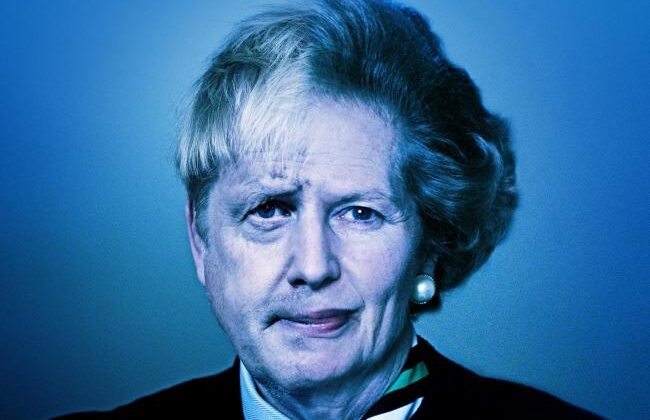 Thirty years ago today Margaret Thatcher resigned as UK Prime Minister and yet still casts a shadow over British politics and the Tories. Fast forward to this week, with Boris Johnson revealing his true feelings about Scotland and devolution – saying that ‘devolution has been a disaster north of the border’ and that it was ‘Tony Blair’s biggest mistake’ – a bit of a tall statement given the Iraq war over which Johnson called for Blair’s impeachment.

Cue lots of back peddling from senior Tories, and Johnson himself saying that he meant that he ‘fully supported devolution’ and the problem was pesky Nats and their plans for separatism. Douglas Ross tried to distance himself from Johnson saying ‘Devolution has not been a disaster,’ and that the issue was ‘the SNP’s non-stop obsession with another referendum’ and of course, winning elections.

We know that Johnson’s government and unionism has a Scottish problem. It has a problem with the SNP and independence and with how Westminster Tories see Scotland. But what has to be recognised in Scotland across the entire political spectrum – pro-independence and anti-independence – is that the Tory solution to all this is not just a challenge to Scotland but to nearly everyone outside the Downing Street bunker. They want to use the present convergence of crises to accumulate power to themselves and to the political centre.

The current trajectory of the British Tories is presented in much commentary as about Johnson and his strengths and many limitations, and thus superficial and solvable. No doubt another Tory could be less unpopular and less wrongfooted on Scotland – but would they really reset the long-term debate or reverse the direction of the direction of the Tories and where they are taking Britain? This delusion has held sway in Tory circles for forty years – under Thatcher, Major’s supposed ‘revival’ in 1992, then Cameron and now Johnson. The problem is Toryism – and it is not going away.

Johnson’s remarks create problems for the Scottish Tories and for their political messaging and positioning in the 2021 elections. Any Tory statements indicating that they are now true believers in devolution and support a Scottish Parliament have now been blown apart.

It takes the ground from under any future Better Together coalition for the foreseeable future. Labour and the Lib Dems cannot sit in the same campaign in a future referendum as a party headed by someone who is against the principle of devolution and the Scottish Parliament. Former Labour MP Paul Sweeney commented: ‘As the late John Smith observed in the early 1990s, the Conservative Party’s intransigence towards constitutional reform was an existential threat to the unity of the United Kingdom’ and observed of Labour and the constitutional debate: ‘We have more in common with those who are seeking constitutional innovation than those in the Conservative Party who hanker for the old imperial unitary state. In truth it is they who are the biggest threat to Labour’s mission.’

Critically Johnson’s remarks gift the story of devolution to the SNP and the independence argument – which is a fatal mistake. This watershed moment is one that unionist perspectives are going to hear again and again, and will have to spend the next few years trying to explain and distance themselves from.

Kenny Farquharson in a piece in The Times wrote: ‘Ultimately, both the Tories and the SNP are enemies of devolution’, and when asked responded that this did not imply any equivalence between the two, even though it offered no qualification. He went on to rationalise this as because the Tories ‘every instinct is to centralise power in SW1’, while the SNP ‘would remove entirely devolution’s philosophical foundation stones.’

This is the Labour take of devolution of the likes of George Robertson as killing ‘nationalism stone dead’ which was always a minority position in the party when it was at its peak and countered at the time successfully by Donald Dewar when he guided the Scotland Act 1998 onto the statute book. Dewar won the argument that the legislation would contain no ‘glass ceiling’ on Scotland’s aspirations and progress to independence if people wanted it – intrinsic to the SNP being full heartedly behind the devolution proposals in the 1997 referendum.

Alex Massie put it better in The Spectator on the relationship between the SNP, devolution and independence, writing: ‘One might argue that the SNP are also devo-sceptics in as much as their preferred outcome is also inherently hostile to devolution but this, is in the end, a too-clever-for-its-own good argument that convinces no one.’ He pithily summarised the SNP gradualist road to independence via devolution: ‘The SNP are against half a loaf because they want a whole one; Tory devo-critics think half a loaf the thin end of the wedge. There is a difference between these positions.’

This brings us to Brexit, what it does and what it represents – both of which are a threat to the union and Scottish self-government. In a measured perspective on Political Betting Alastair Meeks tried to explain to Leavers that the cost of a hard, dogmatic Brexit with a narrow, inflexible version of Britain and Britishness and the implications for Scotland.

Meeks observed that the ultimate logic of hard Brexiteers seems to offer an unattractive, inhospitable vision of the UK to most Scots: ‘Yes, they would definitely prefer Scotland to remain part of the UK for reasons of national prestige. But they aren’t prepared to make any meaningful compromises to achieve it, to help those Scots who have a sense of Britishness as well as a sense of Scottishness value that enough to stay on board. They genuinely believe that only their version of Britishness is valid. They are loving the union to death.’

But Brexit, cliff-edge and car crash approaching whether No Deal or mini-Deal, is only a symptom of a much wider malaise which points to a serious set of challenges coming down the line. This is that Brexit is about a version of Britain, government and power – one of concentrating and restoring it to the political centre in an attempt to return to some mythical, magical, golden age.

The Tories and Restoration Politics

The ultra-Brexiteers view that one of the central problems of modern Britain is that Westminster and Whitehall do not have enough power. They have come to this position aided by Brexit, ten years of Tory government, and their experience of COVID-19. Unbelievably, the incompetent shambles of a UK Government which has cost thousands of lives and paid out billions to Tory corporate pals, takes as a central lesson from this pandemic that Scotland, Wales, Andy Burnham and Sadiq Khan have got in the way by standing up for their national and regional mandates.

They are proposing to not just take powers from Scotland and Wales but to recentralise powers in the centre, in the executive and the hands of ministers, seeing them as representing the undiluted will of the people and thus denouncing other interpretations. This will involve not just rolling back the powers of devolution, but weakening and abolishing a host of checks and balances on the centre. These include the Electoral Commission’s remit and powers being reviewed; putting judicial review and judges upholding the rule of law into reverse; and attacking the power and remit of the Supreme Court with the possibility of limiting its powers; and then there is the UK internal market bill.

The Economist calmly noted this dangerous regression of conservatism this week by stating: ‘The Conservatives miss the ancien regime.’ Constitutional observer and expert Peter Hennessy cited Lord Hailsham’s warning of British government morphing into ‘an elective dictatorship’ in 1976, commenting about the present Tory Government: ‘We are living through Hailsham’s nightmare’.

This stark warning has to be taken seriously by the political classes and everyone in the UK. The Tories aided by Brexit – and taking entirely the wrong lessons from their incompetence over COVID-19 – do not want to share political power on these islands. They believe in one political authority and centre. They believe in the leviathan, the shibboleth of parliamentary sovereignty, and rowing back the semi-codification of the unwritten British constitution through 47 years of EU membership.

This is not just about abstracts but real decisions which affect us all. For example, decisions once taken at an EU level will now be made by UK government ministers with no debate or scrutiny, with ministers for example having wide powers to rewrite regulations on agriculture and medicines – something the Johnson administration sees as a major positive. Yet at the same time Tory politicians blithely talk about the need for UK change stating: ‘It has got to be about the UK changing, not just more powers for Scotland’, but all the evidence is that regressive change is coming.

Denis Staunton, the London editor of the Irish Times, wrote this week about disorganisation and chaos at the top of the Johnson government saying: ‘the two biggest threats to the success of his relaunched government: Scotland and himself.’ It is a good line, but is too charitable and too benign in its views of the degeneration of British conservatism and its commitment to statecraft – a party and philosophy which used to believe and practice competent government and which appears now to have abandoned such norms – witness Priti Patel’s survival as Home Secretary.

Similarly, Alex Massie’s belief that the best terrain for the union argument in Scotland is the cause of ‘unionism-nationalism’ – meaning the championing of Scotland’s autonomy, distinctiveness and traditions in the existing union – does not take account of the decline of unionism’s adaptiveness. ‘Unionism-nationalism’ was what Toryism did in Scotland and the rest of the UK at the height of Empire and at the zenith of the British welfare state – both of which were shared stories across the nations and isles of the UK.

Massie’s argument might work in another political universe, but not this one. We live in a reality where the British Conservatives are increasingly motivated and driven by an English nationalism, intolerance of the other three nations and alternative political centres, and looking to hoard power and authority to themselves.

We live in a world where Gordon Brown’s continual resurfacing – with his claims of a ‘new deal’ to save Britain and move towards federalism would be taken more seriously had he championed and acted upon them 20 years ago. Labour, Blair and Brown had thirteen years in office to act, while the party has never in 120 year existence ever embraced federalism.

The problem is not Boris Johnson, Gordon Brown or Tony Blair. Rather it is the nature of Britain, the idea of Britain articulated by political classes and the increasing intolerant interpretations of Britishness – not just about Brexit but wider politics and power.

This is not just about Scotland. We have to concentrate on the bigger picture. That requires discipline but also partnership, communication and trust between the SNP leadership and wider independence movement. Scotland cannot at this crucial juncture in its history just be about replicating the rotten politics of the British state with our own mini-Westminster. Thirty years to the day of the fall of Thatcher it is time to leave her shadow – and those who wish to perpetuate and extend her legacy.