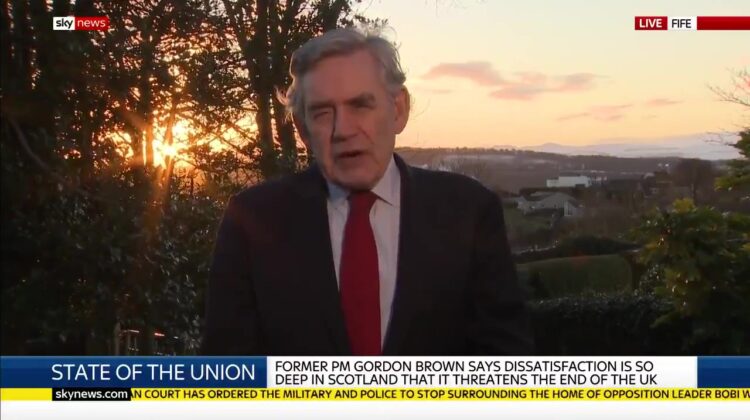 Gordon Brown and how to heal broken Britain

Gordon Brown is coming to the rescue again – raising the alarm, saying that the UK is in danger of becoming a ‘failed union’ unless there is dramatic change. This is the same Gordon Brown who was centrestage in the latter stages of the indyref and pivotal to ‘The Vow’, and who promised a ‘near-federal union’ for the UK within two years of 2014. Before that he was at the apex of New Labour – as Chancellor, then Prime Minister, over thirteen years.

Gordon Brown bitterly divides opinion. There are those who detest him and question his every move, motive and comment; and those who remain part of his dwindling band of true believers and followers. Such has been the public life and impact of Brown over more than four decades that a more nuanced and serious approach is needed. We can consider his mission and politics, personality, humanity, values and record as an attempt to address some of the big issues in an increasingly hostile political environment for centre-left politics. His actions and interventions are that of a missionary man trying to make sense of all this.

Gordon Brown’s journey cannot be seen in isolation – which is how it is often portrayed. He is seen as a lonely, tragic, even tortured figure by some who wrestled with the conflict between power and principle, between socialist conscience and the pressures of political office.

Yet Brown’s trajectory has to be seen as part of the retreat of British social democracy over several decades, the inability of Scottish and British Labour to adapt, and the morphing of the British state from one which embodied redistribution and solidarity to today’s brutal reality – including a parsimonious, dehumanising welfare state. Brown’s political offer now is firmly rooted in his perspective and relationship with the earlier Britain – a country and politics he still to this day conjures up and invokes as being not just relevant, but alive in present day Britain.

Brown’s latest intervention says many worthy things about the lamentable state of Britain and need for change. But when talking about the values and merits of the UK, it seems incontrovertible that he is referring not to the Britain of the 21st century – or even of the era of New Labour – but to a much earlier age. Is it really true that the present UK is as Brown claims ‘the world’s most successful experiment in multinational living’? in reality this is a country with 100,000 dead from COVID-19, with widespread poverty, child hunger and grotesque inequality – in one of the richest countries in the world.

That earlier Britain that Brown draws from is the country, and political and civic order, of his own childhood and formative years. Brown, born in 1951 in Govan, moved to Fife at an early age. The world that he began to make sense of and to interpret was the 1960s and the hope of Wilsonian Britain before its promise began to turn sour and was replaced by the bitter divisions of the 1970s and Ted Heath’s government. Brown’s Britain is firmly anchored in a pre-Thatcherite version of the world, shaped by the politics and priorities of managed capitalism and the historic compromise between labour and capital of the post-war consensus of 1945-75.

Of course, Brown never presents the Britain he is invoking in such terms. This would require him to put his own personal and political experience at the centre to offer a more illuminating explanation of where we are, how far we have fallen, and to sketch out a road map back to the ‘New Jerusalem’ of that earlier period or to a new destination.

Brown’s Daily Telegraph piece published this week says, in relation to the UK, that: ‘A more rounded, thought-through approach is now essential. The Union’s future depends not just on a fair and workable post-Brexit delineation of powers but on rebuilding relationships that are currently broken and renewing our social fabric so that it nurtures them.’

Brown’s specifics include suggesting a Constitutional Commission with a UK-wide remit. He is talking behind the scenes with the likes of Tory Michael Gove about how best to ‘save the union’ but for now detail is scant. Brown’s ideas could evolve into a Royal Commission on the Constitution, which the Tories are reputedly considering, or a Constitutional Convention or series of Citizen’s Assemblies. There is the question of who enacts these proposals. A Royal Commission comes from the state, while Labour may launch its own Constitutional Convention, which could be headed up by Brown. But more than six years after the indyref we are remarkably short of detail on process, let alone plans.

A word should also be said about the Brown odyssey of recent years since the last days of the indyref – again trying to divorce as much as possible from the hype. Brown in the month before the indyref made a keynote speech promising a ‘near-federal union’ within two years of the vote (The Scotsman, 15 August 2014). This went much further than ‘The Vow’ which came later in the campaign. However, since that intervention there has been no significant reform and advance in the UK which warrants the term ‘near-federalism’, or progress towards federalism, and no plans proposed by Brown or others. Not surprisingly this is something that Brown does not like pointed out – his promise of ‘near federalism’ and its absence – as was the case this week in an interview on Sky News.

How do Labour and radicals change Britain?

This is about more than Gordon Brown – and Scotland and independence. Labour have to start talking about power and the future of the UK. As do others – Lib Dems, Greens, those of no party; indeed anyone who is interested in power and its consequences and the nature of UK democracy.

This would involve Labour learning from its actions in power, and in particular the thirteen years of New Labour with Blair and Brown at the helm. Labour have never honestly assessed their thirteen years of majority government – hugely significant in the history and future of Labour and centre-left politics. Labour’s entire other experience of majority government only amounts to one year more than New Labour in office – fourteen years (1945-51, 1964-70, 1974-76).

Labour’s 1997-2010 period in office did many good things: the minimum wage, Sure Start, reducing child and pensioner poverty. But it was diminished and constrained fundamentally by how it chose to do politics, and by the Blair-Brown dual monarchy and command and control politics which inevitably ended up in acrimony and division.

Brown has so far avoided any major self-reflection, assessment and detailed review of his period in office – and its successes and failures. It would be more powerful if Brown now, while making this critique of how power and politics is done in the UK, looked back on his own public role. He might well reflect that he missed the grip of reactionary forces at the heart of the UK and the limits of the British state to advance social justice even when led by people like himself.

Tony Blair continues in his own political universe, defined by his rightward lurch which began in office and has continued apace since. There is a chasm of a difference between Blair and Brown post-office. Brown was always more grounded in, and of, Labour than Blair ever was, and this continues with Brown still much more anchored within Labour’s mainstream.

The longer story is that across the arc of post-war Britain Labour have held office for thirty years in four distinct periods: 1945, 1964, 1974, 1997. There are many long-lasting accomplishments from these governments – the NHS, the Open University, the Scottish and Welsh Parliaments and more. But what they did not do enough was challenge and dismantle conservative Britain and its institutions of power, privilege and inequality: private schools, the House of Lords and the short-termism of the City of London being obvious examples.

Forty years after the peak era of Labour Britain, the party needs a very different politics. It requires a new statecraft of the British state and nations of the UK, it needs to speak about England and not leave this to the right, and it has to articulate a version of patriotism which is not about Empire and imperialism. It needs to be rooted in the collective stories of the people of these lands: an argument put forward by myself and Eric Shaw in The People’s Flag and the Union Jack: An Alternative History of Britain and the Labour Party. All this is easier said than done, but not attempting it has cost Labour and Britain dear.

Gordon Brown can continue to hark back to supposed golden eras of Britain and to give the impression that it still exists or can be revisited. In doing so, Brown is blunting the relevance of his comments, critique and any solutions offered. But he is also doing the rest of us a disservice in preventing a wider and more genuine conversation about the New Labour era beyond simplicities. Such a discussion would consider what a progressive UK government can do when it has a large majority; what scale of ambitions and changes it can bring about; how we learn about overcoming reactionary forces; and finally, what kind of popular and political coalition is needed to remake the British state, to democratise it and develop a different set of relationships across these isles.

There can be no return to the Labour Britain of 1945-75, that is no longer possible or feasible. We also know the limitations of the New Labour era of 2007-10 and the Faustian pact that Blair and Brown made with the City of London and corporate capitalism.

Gordon Brown could offer a thoughtful voice and testimony to remaking progressive politics and Labour, as well as the nature of the UK. But so far he has shown no interest in doing so, instead being content to perpetuate a rose-tinted view of politics which acts as a road block to discussing the New Labour era, and has its roots and values located in past times of Labour, Britain and managed capitalism.

The future of Britain involves understanding the recent past, understanding where we are, the nature of the power elites and forces of reaction, and discussing how to construct alliances and movements to bring effective and long-term change. Labour conservatism and chauvinism, the latter too often disparaging other progressive and radical forces, has long been a problem, as has the uncritical take of too many on the British state and its character – all characteristics Brown has given sustenance to throughout his political life.

Gordon Brown has the intelligence, skills and sense of mission which could aid the big questions that Labour and progressives need to address. It would be tragic if he continues along his present trajectory, invoking a long-gone Britain which has been trashed and torn up. Missionary men usually need crusades but they must be linked to the realities of modern life, rather than of a semi-religious, imaginary and even mystical nature.