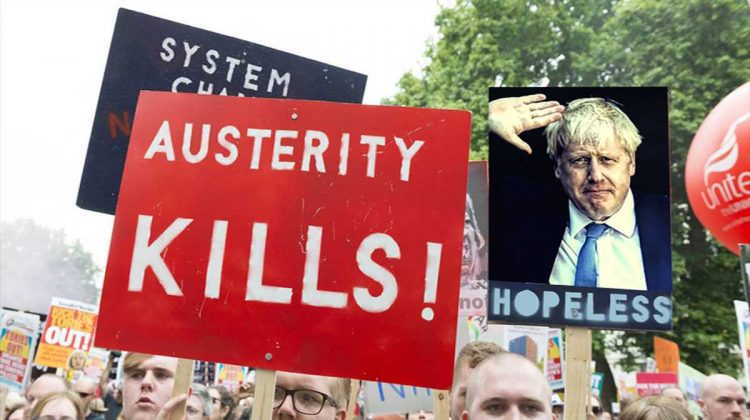 As the scale of the coronavirus challenges rises by the day, another debate is emerging – about how society copes with the scale and inequity of income, wealth and power – and the overall issue of inequality.

Just over a week ago Emily Maitlis opened ‘BBC Newsnight’ with a powerful polemic: ‘You do not survive the illness through fortitude and strength of character – whatever the Prime Minister’s colleagues will tell us. And the disease is not a great leveller, the consequences of which everyone – rich or poor – suffers the same.’

In a similar vein American writer Rebecca Solnit commented that: ‘In theory, all of us are vulnerable to coronavirus, but in practice how well we fare has to do with what you could call pre-existing conditions that are not only medical, but economic, social, political and racial.’

All across the UK and West this debate is not just about the coronavirus and inequality, insecurity and poverty – but going far beyond that into the future of society, the economy and capitalism. Establishment publications such as ‘The Times’ and ‘Financial Times’ are openly wondering about the sustainability of the current economic order domestically and internationally, and in the latter, the need in the UK for a new social contract.

Britain is one of the most unequal countries in the developed world. But the scale and extent of that inequality that covers nearly every aspect of life – from employment and the shape of the economy, to education, health, generationally and geographically – and how it impacts on us as individual human beings in our own lives is seldom fully understood.

The UK is characterised by severe health inequalities among the most severe of anywhere in the developed world. This often sees communities next to each other with huge health disparities. One of these is the gap in life expectancy between Lenzie, north of Glasgow, and Calton, in the city’s east end: a mere eight miles apart but with a 28-year life expectancy gap.

Such are the differences and inequities of place that overlap and reinforce socio-economic class that researchers have coined the phrase ‘geographies of discontent’ to explain the degree to which some communities have been so disadvantaged.

A recent Institute for Public Policy Research report ‘Divided and Connected: State of the North’ looked at the north-south divide and made explicit the connection between inequality and political centralisation in Westminster: ‘The UK is unique in the severity of its regional divides and this is in large part due to the over-centralisation of power in Westminster.’

Twenty years after devolution the UK still has a centralised state and politics particularly in relation to how Westminster governs England, but also sees Scotland, Wales and Northern Ireland. There is little local and regional fiscal autonomy with local government severely constrained across the four nations – unlike the powerful regional Lander in Germany, or even state government in the US which can part mitigate the disastrous Presidency of Donald Trump.

Inequality produces lots of facts and statistics which should shame us into action but they haven’t so far. One reason is that inequality is not only an abstract but something lived and experienced at a human level, and we need to make the connection between these two dimensions and give voice and visibility to those most affected.

Those who have been in precarious employment in pay and conditions – predominantly women and young people – have been most affected by job losses according to the Institute for Fiscal Studies. Besides, that they have also had the double-hit of having to engage with the UK benefits system – not in recent times renowned for its compassion and humanity.

Even with a shift in rhetoric and intent from UK government the years of deliberate callousness and dehumanising benefit claimants remain in the practice of Universal Credit, its five week delay until first payment, and the disgraceful reality that as recently as last week the ‘sanctioning’ – meaning punishment – of welfare claimants has still not been formally suspended.

The dynamics of this system and inequality have been aided by successive Conservative and Labour governments over the past forty years and the encouragement of so called ‘flexible labour markets’, punitive welfare policies, deregulation and encouragement of the City.

The UK has historically had a reputation as a society bitterly divided by class. But when this was true in the middle of the 20th century there was a vibrant working class culture, labour movement and trade unions which stood for a more egalitarian and inclusive society.

This perspective had great influence in the UK from the point when Labour entered wartime coalition government in 1940 which led to the party’s watershed 1945 landslide victory until the mid-1970s. It succeeded in reducing not just inequality and poverty, but the share of the national wealth which went to the richest groups. Significantly two generations of working class people had the prospect of better opportunities, choices, employment and the belief that the future would inexorably get better not just for them but their children. That version of Britain had a veil drawn over it by the election of Margaret Thatcher in 1979.

One reason that the ideas of the left were influential then – relevant for today and future debates – is that they drew from and were informed by a powerful critique of capitalism, markets and selfish individualism.

This can be seen in George Orwell’s critique of Friedrich von Hayek’s ‘The Road to Serfdom’ when it was published in 1944; a book now seen as a foundation stone of neo-liberalism and a favourite book of Margaret Thatcher who described it as a ‘little masterpiece.’

Orwell wrote that: ‘The trouble with competitions is that somebody wins them. Professor Hayek denies that free capitalism necessarily leads to monopoly, but in practice that is where it has led ….’

It could also be seen in the analysis of R.H. Tawney who wrote a persuasive case for egalitarianism, ‘Equality’, and in his 1944 essay ‘We Mean Freedom’ took on Hayek and his attack on government intervention, the state and planning observing that: ‘It is as possible to plan for freedom as for tyranny.’

Tawney believed that freedom had to be reclaimed from the reactionary right and that a more generous, human and economic notion should be advocated, writing that: ‘Democracy is unstable as a political system as long as it remains a political system and nothing more, instead of being, as it should be, not only a form of government but a type of society, and a manner of life which is in harmony with that type.’

Unequal societies breed disease and pandemics. We have been here before in the history of the UK in the world of brutal 19th century capitalism which created the necessity of a labour movement. Pandemics have a long tradition of being intimately connected with class, inequality and poverty.

Take the example of cholera in 19th century Britain. It was at the time seen as a disease of the poor and infecting the working classes living in squalid, unbearable and often insanitary conditions, while most of the middle classes were largely untouched. In today’s pandemic as in earlier ones those who are poor and disadvantaged are suffering and dying disproportionately, while the uber-wealthy can self-isolate in their gated communities.

In the US in the state of Louisiana more than 70% of the people who have died from COVID-19 were black, more than twice their 32% share of the state’s population; in Chicago, New York, black people make up 29% of the city’s population but 70% of COVID-19 deaths.

The picture might not be as stark in the UK but there are similarities. An analysis by the Intensive Care National Research and Audit Centre of 3,300 British coronavirus patients found that 35% were non-white compared to 13% of the UK population. Similarly, a ‘Guardian’ analysis found that of 53 NHS staff known to have died of COVID-19 68% were BAME including 22 nurses, two porters, a radiology support worker, a patient discharge planner and a hospital bus driver.

The internationalisation of the virus is seen as being made possible by affluent, connected Westerners with the wider global price paid by the poor: a sentiment powerfully expressed by an Indian doctor from Mumbai who said that: ‘In essence, a disease that was spread by the rich as they flew around the globe will now kill millions of the poor.’ In Argentina and Uruguay the virus has become known as ‘La peste de los chetos’ meaning ‘the plague of the snobs’, due to a number of high profile elite and well-connected cases who initially got the virus.

The UK, capitalism and international global order have benefitted from nearly three decades of uncontested globalisation since the collapse of the Soviet Union. In this world they promised the earth – unprecedented rising living standards across the globe, economic choice and opportunity, and a kind of freedom and liberation which although narrow was a transformation for millions in China and India.

As Rebecca Solnit has observed the pandemic has illuminated the fragile threads which sustain prosperity and making a livelihood for millions across the planet: ‘The pandemic is a spotlight – that illuminates underlying problems – economic inequality, racism, patriarchy’ which as much as the virus ‘weaken us a society, morally, imaginatively – and otherwise.’

If the current economic and social order is to be overturned, a movement for change as persuasive and powerful as previously tamed capitalism has to be created. This will have to build coalitions of majority public support, remake the labour movement and trade unions, draw from the ideas of greens, feminists and black and ethnic minority workers, and in so doing come up with a different vision of the world and the future.

It will have to have at its centre an understanding, in the words of the late sociologist Zygmunt Bauman that: ‘The carrying power of a bridge is not the average strength of the pillars, but the strength of the weakest pillar’ and that we should similarly judge society in such a way – a point underlined by the coronavirus.

Such a movement will face deep-seated opposition across the world from the global class who have gained from recent decades. It will have to defeat the Tory Party’s version of Britain and the world – standing up for the entrenched interests of the City, finance capitalism and deregulation, and those who have emerged as winners from the fundamental shifts in the economy and society pre-virus.

A pivotal part in changing this is understanding the role of the British state domestically and internationally as an advocate and underwriter of the grotesque, unsustainable, inequitable capitalism which has caused such disruption and dislocation.

The current British state can no longer be seen in the way that Labour used to view it – as a force for good, progressive ends and redistribution. Rather it has become a state captured by the forces of neo-liberalism and corporate interest capitalism, and it has to be completely remade if it has any future.

A start would be if Labour, the Greens and others openly recognised the scale of the problem and grasped not only that inequality – but the anti-social individualism and crony capitalism promoted for decades by the British state is indefensible, unsustainable and immoral – and literally kills.