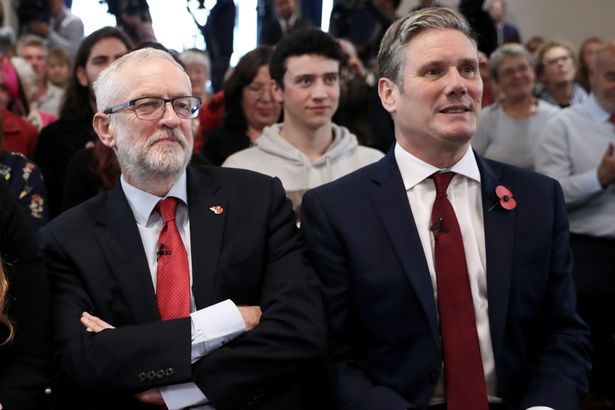 Jeremy Corbyn, Tony Blair and Keir Starmer and when was Britain’s Golden Age?

Every society has a golden age – often mythical, but with some relationship to events and reality. In Britain, this is often continually referenced as World War Two, ‘the Blitz spirit’ and Dunkirk – all much in evidence in recent weeks in the face of coronavirus.

Other stories are available but get less coverage and mileage. One is that of ‘the swinging sixties’ and the Beatles; another is the idea (floated by the New Economics Foundation) that 1976 was the happiest year in post-war Britain.

Step forward a new contender as we shift our understanding of the past through the lenses of the coronavirus. Last week the writer Tim Lott made the case, wait for it, for the decade of Blair’s Britain as the equivalent of ‘our Edwardian summer.’

Lott opens by winding back the years to that moment in May 1997 when eighteen years of Tory Government were ended by an emphatic Labour landslide, saying that: ‘Like millions of others, I woke up on that May morning of ’97 feeling a mixture of joy, relief and hope.’ He continues: ‘For the following decade, nearly everything got better for nearly everyone – at least in this country.’

Lott then issues a caveat but presents it inaccurately: ‘We were floating on a vast bubble of credit that was bound to burst sooner or later’, stating that ‘no one, apart from the trader-turned philosopher Nassim Taleb seemed to see it’ – Taleb being the author of ‘The Black Swan’. This misses the warning signs from a whole school of left-wing economists and thinkers including Larry Elliott, Will Hutton and Stuart Hall.

Blair’s Britain, according to Lott, was a place of impressive achievements – ‘Child poverty and pensioner poverty dropped exponentially … New hospitals and schools blossomed … Gay civil partnerships were introduced, discriminatory legislation like Section 28 was repealed ….’ And then we get to what really matters for the uber-privileged middle classes in that ‘Britain, long the butt of jokes about its awful food and drink suddenly and unexpectedly became the gourmet capital of the world.’

Perhaps the worst take in all this is Lott’s angle on culture. First, he lists what we watched on the small screen, with ‘American box set dramas such as The Wire, The Sopranos and Six Feet Under [which] ushered in a TV renaissance’. Second, he praises big warehouse-type buildings as being great exponents of culture – ‘Tate Modern’, ‘the Sage Gateshead’ and ‘the Baltic’ and the like.

But this is only the appetiser for his pièce de résistance on culture, listing the success of Harry Potter, Philip Pullman’s His Dark Materials trilogy, and Mark Haddon’s The Curious Incident of the Dog in Night-Time, reaching for his crescendo film-wise: ‘In cinema, apart from Richard Curtis, we had James Bond, Bridget Jones, Slumdog Millionaire and Billy Elliot.’

If that were not enough Lott actually embraces Britain as the crass, sentimental, unrealistic Notting Hill: ‘Walking amid the market stalls of Portobello Road, it was possible to feel that although Richard Curtis’s 1999 film Notting Hill was obviously a fantasy populated solely by white middle class people, it wasn’t so far from the reality. It was a fairytale but fairytales, it seemed then, could come true.’

It is revealing that what is missing from his list of the positive things that made us great back then are the national minimum wage, Sure Start in England, and the single most impressive achievement of those years: the Good Friday Agreement and peace in Northern Ireland. It goes without saying that Scotland and Wales, along with the restoration of democratic government for Greater London, do not get a mention.

The negatives of the decade are mentioned in passing in one short paragraph: ‘Climate change was becoming a concern but wasn’t yet seen as a global crisis’ he writes when the Rio earth summit was 1992. In quick succession, ‘9/11, the 2003 Iraq war, and the 7/7 terrorist attacks on London’s public transport in 2005’ get a mention before Lott observes: ‘Bad things undeniably happened yet they felt like the exceptions rather than the rule.’ Little things like ‘the war on terror’, clampdown on civil liberties, and illegal wars.

Lott was born in 1956 – making him 64 in 2020 – an age understandably susceptible to looking back on your life with an element of regret. This means Lott was 41 in 1997, an age which should give a sense of perspective at the time; of putting his own views in the context of other potentially halcyon, defining moments and memories. These range from the late 1960s to highly charged 1970s with its flux of popular cultures, and even for those of a liberal-left persuasion, the 1980s and the counter-cultural story to Thatcherism.

Instead, Lott writes: ‘For those like me – fortysomething, starting a family, forging a career – it was a golden time. But we were not alone’. It was apparently an age of retiring on ‘generous pensions’ leading to a ‘boom in luxury cruises’ with people from ‘ordinary backgrounds’ able to enjoy ‘several voyages a year’.

This third-rate nostalgia for a world which existed just over a decade ago shows that nostalgia isn’t what it used to be and is coming round quicker. It is an uncritical celebration of philistine culture representing the hollowed-out nature of a large part of the liberal and chattering class then and now. This is one of Britain’s leading writers of the past two decades invoking the world of New Labour and with the exception of a passing reference to Nassim Taleb, not one thinker or intellectual makes any appearance.

This take on recent years in Britain says many things – many of them inadvertently and without Lott’s full awareness. First, all of this comes over as a caricature of Blair’s Britain and our recent past, but this is what part of the liberal classes felt about 1997. To choose to want to create a ‘golden era’, ‘our Edwardian summer’, a land and past where one thinks, ‘Oh, it was very heaven to be alive’. None of the limits of this world seem to really matter to Lott – whether monumental such as 9/11 or failing to get any mention: ‘the war on terror’ and privatisation and outsourcing of public services.

Second, this is the voice of a dominant media and cultural class who believe that their selective worldview is worthy of being universalised. No part of the UK outside London appears in his account apart from the Sage Gateshead and the Baltic. This is the Londoncentric version of Britain – the one that the rest of us are bombarded with every day and Lott has no idea that is fundamentally part of the problem.

Third, missing is any discussion of power, inequality and capitalism and in particular, finance capitalism and the grotesque over-reach and entitlement ethos of the City of London. Fourth, one of the biggest omissions of that era and which Lott’s piece exemplifies is that progressive politics are just taken as a given and the result of the sum of individual policies. Then and now there is no defining of what a good society might look like – something which became central to the failures of the Blair-Brown project – and the lack of permanence of many of their achievements – the Tory rolling back of Sure Start being one example.

Fifth, the above weakness in New Labour was also evident in the US during the Presidency of Bill Clinton and even more of Barack Obama. This has come back to haunt us all and cost us dearly because progressive policies – of which there were many in the UK in those years – were not grounded in a philosophy and set of values which took on the destructive and damaging possessive individualism of Thatcherism.

Hence when the tide turned in the UK in 2008-10 we ended up with a decade of Tory austerity and cuts, Brexit and a country not at ease with itself. The US was even worse, with the emergence of Donald Trump – and his election as President having a relationship with the failures of the Obama Presidency (and before that of Bill Clinton). If the Blair era had really been ‘a golden era’ of progressiveness it would have altered Britain more fundamentally, and we would not be where we are today.

The past is always changing, shifting and being reinterpreted. It never stands still. That is right and proper. People on the liberal-left need to have an accurate, nuanced, detailed understanding of what happened under the Blair-Brown project in office. This has to be one which avoids the scorn of the purist left and its blanket dismissal of all that happened as betrayal, neoliberalism and the actions of ‘Red Tories’. But it also has to not embrace the uncritical, glowing and embarrassing eulogy which Tim Lott has offered.

All of this is relevant as the curtain draws on Jeremy Corbyn’s disastrous leadership of the Labour Party and that of Keir Starmer begins. There can be no going back to the mantras of the New Labour era or unprincipled centrism, but nor does the left oppositionist mentality which characterised Corbyn and John McDonnell offer any future guide.

Rather Labour have to come to terms with the choices and compromises inherent in winning and being in power. When I was growing up people on the left saw Harold Wilson and Jim Callaghan as betrayers of their cause, even class. This despite Wilson winning four out of five elections, being in office eleven out of fifteen years, and the major policy gains of the 1964-70 Wilson Government.

What influenced that dismissal was the left-wing view that principle matters more than power, and that all power comes at a price. Hence, by the end of New Labour’s unprecedented three election victories (Labour having only previously won two working majorities in its history: 1945 and 1966) many on the left were eager for the purity of opposition with its simplistic choices. Tony Blair clouded this process by providing such an easy hate figure.

Tories do not have this debate about principles and power. They believe in power and their entire raison d’être is about government and ruling. Many on the left do not even understand this basic difference between Labour and Tories. Labour has if it is ever to form a sustainable governing coalition across the UK to come to terms with its own past, embrace what it has succeeded in doing in office as well as being critical of its failures.

This would include cutting back on the hero worship of Clement Attlee, putting Harold Wilson and Jim Callaghan in their context of managing decline, and seeing what the administrations of Tony Blair and Gordon Brown got right as well as wrong. The Tim Lott uncritical take is as immature and unhelpful as the most dogmatic ultra-left-wing revolutionary posturing.