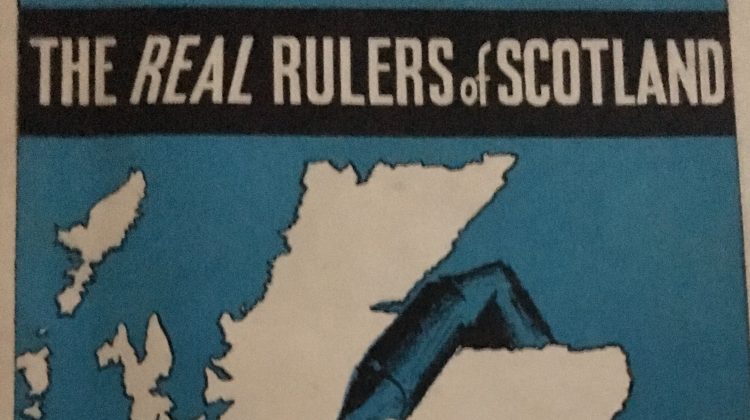 Let’s Talk about Power in Scotland

Britain is broken. Its state and government is callous, indifferent and incapable of looking after the interests of the people. And even more so, the British establishment – old and new – only cares about itself and its cronies.

As Britain is engulfed in multiple crises, we cannot just sit back and idly watch and assume that we are different and morally better here. We have to prove that this is so, and embody it in our actions.

The now well-used term ‘British establishment’ slipped into popular usage via a 1955 article by Henry Fairlie, who defined it as not just about ‘the centres of official power’ but ‘the whole matrix of official and social relations within which power is exercised.’ Owen Jones writing nearly sixty years later put it that there was nothing ‘effective, efficient and rational’ about this way of running society and that the establishment is ‘the institutional and intellectual means by which a wealthy elite defends its interests in a democracy.’

It cannot be denied that the Scottish establishment is alive and kicking, and acts in self-serving and self-interested ways. Once upon a time it was made up of powerful and sometimes very public individuals – some of whom ran companies like Coats Paton, Govan Shipbuilders, Anderson Strathclyde, and the Scottish clearing banks. They were captains of industry, sat on boards and public bodies, were beneficiaries and creators of patronage, doyens of charities, and favourably reported upon in newspapers.

We like to think that we have advanced from this state, have become more democratic and open, and are very different from those days of deference. We imagine that Scotland’s egalitarian and radical credentials alongside the establishment of the Scottish Parliament has changed all this.

The Scottish establishment is still with us. It has changed in character and composition but is still about class, social networks, and who you know – and about social exclusion and power. Beyond the Scottish Parliament and local government it is still overwhelmingly male and white.

The establishment’s first quality is to deny that it actually exists – to limit scrutiny and criticism. Magnus Linklater in the introduction to a book called Anatomy of Scotland wrote that Scotland was ‘a small country, and in finding out who runs it, we came, time and again, across some familiar figures’, concluding with the audacious claim: ‘It would, on the other hand, be very hard to talk about a Scottish establishment.’

Power and elites manifest themselves in many different ways – economically, socially, financially, and in areas such as the legal profession, in education and in the media – with many of the networks and connections which sustain power hidden from public view.

Scotland’s economy has been transformed over the post-war era. Gone are ‘the captains of industry’ and many Scottish independent companies have been the subject of external takeovers transferring corporate headquarters and control out of Scotland. The emergence of finance capitalism saw the rise of Edinburgh as a modern financial centre, but it has been affected by the 2008 crash and continued rationalisation in banking, all of which begs the question of the relationship between international finance, businesses and investment here.

Privilege in Scotland is underwritten by private education which only educates 6-7% of children but has a disproportionate footprint in society. For example, 25% of Edinburgh’s secondary pupils attend a private school while St. Andrews and Edinburgh universities have significant intakes of privately educated pupils.

The privately educated elite may not be as prominent in Scotland as in England but carry a power way above their small minority status. They define large parts of life, home and work in Edinburgh, and to a lesser extent, Glasgow. They have their own networks and institutions and as Roddy Martine has written: ‘They meet at their clubs: the New Club in Edinburgh, the Western in Glasgow, the Honourable Company of Edinburgh Golfers at Muirfield in East Lothian and the Royal and Ancient Golf Club of St Andrews.’  Muirfield only voted to overturn its men only membership in 2017 motivated by not losing its status as an Open Championship course.

There are also the inequities of one of the oldest forms of wealth inequality: land ownership. For all the numerous land reform pieces of legislation passed there is no real protection against foreign, absentee ownership and such owners selling land as if it were a mere commodity with the communities in question having no say. It is an indictment that twenty-one years of a Scottish Parliament have not acted on such injustices, and that Scotland still has the most unequal concentration of private ownership of land in the developed world.

A critical arena of power is the intersection between politics, media and corporate capitalism. Over twenty years ago the Sunday Herald produced a diagram showing the relationships and connections between people in these areas and the incestuous links of Gordon Brown, Jack McConnell, Kirsty Wark and Gus MacDonald. This was the veil being lifted off the patronage and favouritism of how the Labour state worked and dominated Scotland.

If we fast forward to the present we could do with a similar exercise for modern day Scotland because politics, media and corporates are used to getting familiar, close and over cosy. One example of this which has recently emerged into the light again is that of public affairs consultants Charlotte Street Partners in Edinburgh run by ex-SNP MSP Andrew Wilson, ex-party strategist Kevin Pringle and Malcolm Robertson.

Charlotte Street Partners consistently refuse to say who funds them and who they work for. Not only that, Wilson consistently claims that ‘I am not a corporate lobbyist’ and ‘We don’t lobby government’ – statements which can only be based on the most narrow definition of what lobbying is. The list of clients that have emerged including ScotRail franchise providers Abellio, FirstGroup, Cluff Natural Resources (frackers), Tesco and News Scotland (publishers of The Times and Sunday Times) suggests that they must be getting something for their money.

Twice in recent times powerful once respected institutions have imploded and the media and public life has been found wanting. The first of these was the collapse of the Royal Bank of Scotland (RBS) in 2008 under the leadership of Fred Goodwin. The second was the example of Rangers FC which went into liquidation in 2012 after years of free spending by David Murray.

The two have much in common. Both organisations had charismatic leaders who bent process and governance to do what they wanted, spent above their means, and forced subordinates to do their bidding. But equally telling they managed by a mixture of charm and intimidation to force the media to not ask awkward questions and instead to present their selective self-interested version of events. With Rangers this became so pronounced that a phrase was born – ‘succulent lamb journalism’ -to denote the way that access was traded to buy what was in effect advertorial, corporate-friendly, coverage. After the Rangers explosion the media made all sorts of mea culpas that this sort of thing would never happen again, but it has returned in sport and across large parts of public life with honourable exceptions.

After the Linklater book at the onset of the Parliament I commissioned Anatomy of the New Scotland as a response but that is nearly twenty years ago. There is, as George Kerevan has recently written, a telling omission in research and writing, namely on ‘elites in Scotland’ – the last great unexplored area of contemporary society.

Scotland’s establishment has to be held to account. That cannot be done if we just focus public debate on party politics and the abstract idea of independence. Rather we have to look at who has power in our country, who runs things and makes decisions about our lives beyond politicians, and in whose interests are they acting.

We have to have a public culture and country where we unmask secretive elites, challenge concentrations of power and networks – economic, social, cultural, political. And to do so we need to create and maintain alternative power centres – where decision making is just not about whether it is made in the Scottish Government and Bute House of Westminster and Downing Street.

That requires a vision of Scotland which isn’t about replicating Britain on a small scale. On the one side there is the almost sentimental yearning for a ‘little Britain’ version of Scotland, drawing on 1945-75 and memories of solidarity. On the other there is recreating the failings of the corporate capture of the British state and remaking ourselves as the new ‘Celtic Tiger’ on the block: deregulating, cutting taxes and playing the game of the new vested interests. The first is unrealisable; the second unattractive and unsustainable.

Scotland, the UK and world faces unprecedented crisis with COVID-19 which will take years to come back from after an unimaginable degree of human loss alongside damage to the economy and society. The global order and corporate capitalism have shown themselves to be inadequate in dealing with crisis and having to be bailed out by us, the public and state, just as in 2008.

This illustrates that this crisis is a moment for reassessment and radicalism and questioning the credentials of those in power across our society. Scotland has had these debates before in times of disruption, including in the midst of the Second World War engaging in a widespread discussion about the future of the country which was led at a UK level by the two Beveridge Reports.

Scotland saw a host of similar ambitious publications – which drew from experts, planners, campaigners and radicals. Publications such as The Real Rulers of Scotland assessed who and what had economic power in the country while The New Scotland outlined a Beveridge-like plan which went beyond the UK. It proposed widening economic democracy, power to workers and decentralisation, and a politics where politicians did not become ‘a privileged ruling class’.

Rather it recommended that Scotland should have a Parliament which ‘would act not so much as the sovereign assembly dictating its will to the people (for this is English Constitutional Law, and the immemorial Scottish one which recognises the People, and not the King in Parliament, as Sovereign)’ but rather ‘as a central co-ordinating bond linking the Sovereign self-governing People.’

Scotland has a different tradition of power and legitimacy to that of England: the notion that power springs not from the Crown but the people. It is a potent and enabling story and tradition: one which in part marks out who we are and why Scotland is distinctive. But we do not act upon it enough in the practice of our democracy and society and we should.

Frederick Douglass, the Afro-American slave turned abolitionist and radical, once said that ‘Power concedes nothing without a demand. It never did and it never will.’ The debate about Scotland, power and elites cannot wait until some point in the future after an independence referendum or when Scotland becomes independent. It has to begin now otherwise the elites and closed shops who determine too many decisions and power will go on making those decisions in favour of themselves. Power matters – not just in the abstract or in sovereignty but in terms of the day to day decisions which shape our lives and this should be central to the debate about the future of Scotland.