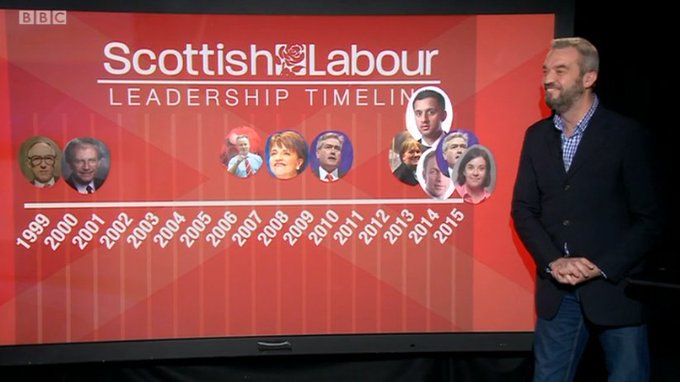 The Scottish Labour Party has contributed so much over the past 20 years; not in terms of substantive politics in government or opposition but in the realm of scandal, drama and soap opera.

Richard Leonard’s resignation is the latest episode in this long running saga which has increasingly been playing to diminishing audiences and reviews. He has been the ninth Labour leader in two decades; the sixth leader in opposition, and the fifth since the 2014 indyref, as the change and churn of leaders speeds up and their impact gets less and less.

Scottish Labour once was the dominant political force in the land. It saw Scotland as part of Labour’s heartlands and in so doing took voters for granted and became a party of patronage, preferment and cronyism, and the political establishment. For some in Labour the creation of the Scottish Parliament was a democratising and energising act, but for many in senior positions it was a way to keep, even to extend, the self-preservation society of Labour Scotland.

The challenge now is way beyond who becomes the tenth leader but about what if anything the party actually stands for. Carl Shoben of Survation pollsters puts it: “The question really isn’t who but what. Its support base has become institutionalised at below 20%; it was in the 50s”. Can Labour after fourteen years in opposition find a collective vision, united leadership, core message and strategy? And if this were not a tall enough ask, can it do all this while cutting through and having an impact and getting noticed by voters?

Fourteen years of Labour opposition have taken a grim toll; as has 21 years of devolution and the Scottish Parliament. During its eight years in office, the party failed to develop a clear purpose of what it was meant to do with power, and the three Labour First Ministers – Donald Dewar, Henry McLeish and Jack McConnell – seemed to have no clear idea of the kind of Scotland the Scottish Parliament was meant to be aiding and creating. Rather, the Parliament seemed to be about two things: keeping the Labour gravy train on the road and keeping the Nationalists out of office.

It is only through understanding the missing ingredients of Labour in office that we can make sense of what happened in opposition – and their near-terminal decline. The party had only a set of self-perpetuating, negative and defensive messages for keeping the show on the road. Senior Labour politicians at the time, like Douglas Alexander and Margaret Curran, believed they could go on winning election after election, and were often happy to collude with a party culture which was not about inner democracy, but one shaped by patronage and preferment.

This meant that when Labour lost in 2007, at first narrowly then by a wide margin in 2011, it was ill-equipped to adapt. The first result was dismissed as a fluke with normal service to be resumed at the next election. This has not happened and increasingly the party can be seen as having lost its way, its soul and direction, left wandering in the wilderness.

When Labour lost in 2007 their elected members in Holyrood used to sit scowling at the SNP group in the parliamentary chamber as if their right to govern had been usurped. Speaking to a group of Labour MSPs shortly after that watershed election, I offered them one simple piece of advice: “Take the scowls off of your face. They look like the face of Labour entitlement, as if you think the SNP have come and stolen your scones.”

The following spate of leaders – Wendy Alexander, Iain Gray, Johann Lamont, Jim Murphy, Kezia Dugdale and Richard Leonard – tried a whole host of desperate measures (Brownite, Blairite or Corbynite) to no avail. Most passed without making much impact: Alexander said “bring it on” about an indyref and was blocked by Gordon Brown, Lamont attacked a “something for nothing” culture, and Gray was chased into a Subway sandwich shop – offering the defining image of his disastrous 2011 election campaign.

The point in the above brief history is that more often than not Labour leaders in opposition had little impact, said nothing noteworthy, and became increasingly irrelevant. All of this reinforced the reality that Labour in opposition did not know the first basics about how to do opposition or indeed combative politics. They had grown complacent and tired from decades of being in office.

The independence question is only part of this story. Labour came into the 2014 campaign not wanting to have this debate. This ill-ease could be felt from the top to the bottom of the party; it could be seen in the manner of Johann Lamont’s leadership and subsequent resignation; and in Alistair Darling becoming head of ‘Better Together’ aided by no one else being prepared to step up.

Two disasters befell Labour in the indyref. There was the common platform with the Tories. But this belied a deeper problem: that there was no distinctively Labour message on the case for the union. Where was the Gordon Brown case for the union as the argument for social justice? It was conspicuously absent.

To add to Labour’s woes the SNP and independence occupied the terrain for social justice which Labour thought was its by right; without this post-2014 the party has lost voters to the SNP and any anchoring and sense of its own values. Carl Shoben observes that since 2014: “Labour’s core vote feel better represented by the SNP. Until that changes, not much more will change.” And he notes: “[the] SNP grabbed the change/centre left mantle from Labour and have deepened that hold. Labour attacks on SNP rebound as [an] attack on an idea.”

The Independence Question and the Future of Scottish Labour

Independence is seen as critical to the party’s fortunes but every Labour position on this carries risks such is the fragile, declining nature of their vote. There are five main Labour positions on independence including the current status quo: UK-wide reform, supporting independence, being neutral or leaving for individual members, and supporting Scotland’s right to self-determination as a principle. All carry risks for the party, but the biggest risk is inertia and being scared to embrace change as any new position involves the risk of losing voters.

Two of the five are non-starters. The federalist chimera seems to rise from the ashes every time the UK is in crisis, and yet no one including Gordon Brown has come up with a detailed plan – which has to be a plan with English popular support. Much as it might makes matters simpler for independence, Labour cannot officially embrace independence – as it would have no plausibility having argued the opposite all its history. On this latter point, the wider trade union movement and STUC have much more leeway and prospect of supporting independence.

The most powerful position and one deeply anchored in Labour traditions is to unapologetically stand for the principle of Scotland’s right to self-determination as a nation and people. This is a position which can be traced back through Labour pioneers and radicals such as Keir Hardie, Tom Johnson in his pre-wartime coalition period, and James Maxton, and goes much further than the limited politics of ‘devolution’. Even more it has the prospect of connecting constitutional change to economic and social justice, inequality and power, and hence challenge those in the SNP who see independence as an end in itself rather than a means to an end.

Independence is ultimately about the issue of power, where you see it lying and who you represent and give voice to. There are different Scottish and English expressions of power which have deep seated roots in tradition, mythology and memory, and which impact on the very different interpretations of sovereignty and union which can be seen in the two countries.

This brings us to the power issue of ‘Scottish Labour’ and ‘London Labour’ and who the party ultimately represents and is answerable to. Johann Lamont when she resigned as leader got to the heart of this, complaining of people in then Labour leader Ed Miliband’s office as seeing the Scottish party as merely a subservient “branch office”. There have been some more changes since such as the leader who serves in Holyrood being leader of the entire Scottish party. But it is still not a fully autonomous party, and cannot make binding policy on a range of reserved issues such as nuclear weapons sitting in Scotland’s waters or going to war.

This question of who Scottish Labour represents and is answerable to is at least as important if not more so than the party’s stance on independence. Everything else flows from it. There is an answer however which draws from the party’s radical traditions, that would require leadership, vision and courage.

The past week saw the anniversary of the foundation of the Independent Labour Party (ILP) – on 14-16 January 1893 – which was led by Keir Hardie. It played a key role in the creation of the Labour Party and had a profoundly radical mission and ethos, along with deep Scottish connections, championing home rule and land reform, and enjoying significant support in ‘Red Clydeside’.

There is no future for a party which can have the moniker ‘London Labour’ associated with it. The party should face hard facts. It should embark upon a new life and mission, refounding itself as a fully autonomous Scottish party called the Independent Labour Party. The word ‘Independent’ is of great import here as it signals that this is a new entity beholden to no one, is independent in action and mind, and draws from a rich pool of ideas.

This new force would be part of the Labour family and movement but independent and only answerable to the people of Scotland. It would draw from that older tradition of self-government suspicious of central power – whether at the hands of the state or corporate power – and pose a version of democracy more diverse and pluralist.

At the moment this sounds implausible given the caution and conservatism in Labour and indeed most Scottish politics. But not so long ago one prominent politician floated this as the solution for their party which had lost its way: namely Murdo Fraser in the 2011 Tory leadership contest he lost to Ruth Davidson. Her victory meant the party only renewed how it presented itself and its branding, not its core values and what it stood for. ‘Doing a Murdo’ could yet give life to a Scottish Labour Party as a new force when it is currently going nowhere.

From that the party has to learn how to do opposition: to be an insurgent, to challenge insider politics and the political establishment. In other words the Labour Party in Scotland should challenge all the forces and qualities it used to represent when in power. This will be more difficult than it sounds as the party has forgotten what it stands for, the Scotland and future it wants to give voice to aid creating, and even the hunger to win. And anyone pining for Gordon Brown to save the party he loves is not living in the present or really understands the huge predicaments that Labour faces.

These fundamentals matter more than who emerges from what will be, with the May elections imminent, a necessarily truncated leadership contest. But the party cannot continue to play safe, and needs to undertake a radical refoundation, to avoid accelerating the otherwise inevitable long Labour slide into irrelevance if it does not act and change course.