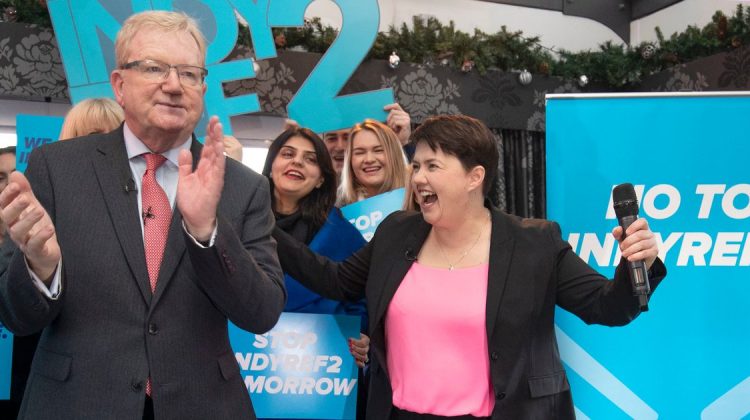 Scottish Tory Troubles at the top, in the party and in the unionist cause

Jackson Carlaw’s resignation was the biggest hit of his short leadership. It marks the end of one of the most unhappy periods of any Scottish party leader. Its only defining characteristics were that it was short and yes, he wasn’t very good. But it does underline bigger troubles in the Tory and unionist world.

Carlaw lasted 168 days in the job. Many of these saw him restricted – like Jo Biden in the States – to his house due to lockdown. It worked for Biden but in this case left Carlaw struggling for visibility, and when he emerged he tanked. His brief stint at the helm is only exceeded – if not in shortness then certainly in ineptness – by Jim Murphy’s reign as Scottish Labour leader of 184 days. Jo Swinson had 145 days as UK Lib Dem leader – leading the UK not Scottish party – with both her and Murphy’s tenure ending through the loss of their Westminster seats.

This is a crisis in Scottish Toryism and unionism, but the Tories are used to being in crisis and having hard times. But this is of a different degree. This has been recognised by some senior Scottish Tories, hence their move to force Carlaw out – perhaps an example of how to act for Scottish Labour. Carlaw magnified the wider crisis of unionism, with 46% of voters having no idea who he is – a figure exceeded by the 56% who have no idea who Richard Leonard is despite being in post for nearly three years.

Until Carlaw’s 168 days the Tories had at least done okay under devolution in leaders. Up until last year they had only three leaders in 20 years – David McLetchie, Annabel Goldie and Ruth Davidson, and now after Carlaw, will be suddenly onto their fifth. That is how rot begins. When Labour eventually dismiss Richard Leonard which they will before or more likely after May 2021, they will be on to their tenth leader in just over two decades.

Toryism has a strategic problem, with former Tory head of communications Andy Maciver describing it post-Carlaw as ‘It’s not the captain. It is the ship.’ There are obvious and immediate concerns – Brexit with the threat of No Deal looming, the state of the union, Boris Johnson’s leadership, and pressingly the question of how to fight the SNP and next year’s Scottish elections.

One argument regarding the latter says focus again on No to indyref2, as this has been a proven vote winner with a sizeable constituency and allowed the Tories to scoop up lots of disillusioned Labour voters. Another view says that they can’t keep saying ‘No’ – and then losing an election and then continuing to say ‘No’. Eventually serial losing undermines the weight of saying ‘No’, and ultimately the cause of the union itself.

The other side of this argument says focus on policy and the SNP’s track record. The trouble with talking about real stuff is that for the moment it is a side show to the main event – independence. And equally problematically the Tories have little distinctive to say on public services, education, health and local government. When was the last genuinely Scottish Tory idea? The answer is the poll tax – which is sort of near-history.

Another Tory division is how to deal with Nicola Sturgeon, her credibility and popularity. Tories north and south have frequently changed tack, with the latest Downing Street wheeze to emphasise ‘respect’ towards devolved administrations and leaders – but we will see how long that will last. Boris Johnson and Michael Gove are supposedly signed up to this new spirit – one they did not bother consulting Carlaw on.

Yet amongst the Scottish Tories, Carlaw was widely seen as going after Sturgeon ineffectively – with some even thinking him not combative enough, treating politics and FMQs like a golf clubhouse disagreement. None of the above does justice to the predicament and scale of crisis the Tories and unionism is in.

It has become a cliché that the last and only time the Tories won a majority of the vote in Scotland was 1955. But what is seldom stated is that the Tory Governments elected in 1951, 1955 and 1959 – under Churchill, Eden and Macmillan respectively – did so on each occasion winning more votes in Scotland than Labour. This underlines the scale and length of Tory decline.

The Tory inexorable decline is about much more than Thatcher, her ism and legacy – for it both predated her and has lasted long after she resigned as PM – thirty years ago. Macmillan’s Toryism had an appeal here but also spoke to a Scotland beginning to wither even in the era of the 1950s with deference, a Scotland of social apartheid and caste system, Protestant working class traditions and the enduring appeal of the last days of Empire fading into the past. The Tories knew then that their fortunes were on the wane: reorganising and renaming in 1965.

This was all part of Tory modernisation with Ted Heath supposedly bringing the party across the UK into the modern world and for social change. He even attempted to capture the national question post-Hamilton with his much hyped ‘Declaration of Arbroath’ of 1968. Few now remember that the Tories were, in the post-war era, pro-devolution before Labour. They kept this stance from 1968-76 with Thatcher ditching it in her first year as Tory leader and returning the party to its long held anti-devolution stance.

Thatcher did not just stop there. She wore away the traditional Tory unionist argument which, while against a Parliament, was also against centralisation and standardisation and understood that because Scotland was a proud nation the argument about Scottish autonomy and distinctiveness could not be left to home rule and independence.

Now Toryism is getting nostalgic for the Ruth Davidson era. This only ended eleven months ago illustrating the idea that nostalgia isn’t what it used to be and comes around sooner than ever these days. Ruth Davidson remade the political weather for Ruth Davidson. She earned gushing media reviews here, even more in London, including in places that had forgotten the Scottish Tories and even Scotland.

Davidson increased the Tory vote but from the doldrums. The party under her leadership won 14.9% of the vote in 2015 – the party’s lowest Westminster share since 1865, and subsequently won 28.6% two years later, their highest since 1979.

What she did not do is remake the political weather for the Tories, their message or image. It is too easy to talk of her ‘spectacular success’ as The Times editorial did post-Carlaw; this is the language of a party used to losing and which has forgotten what it is like not just to win but to want to win.

Davidson gave the Tories a window, but she and they failed to use it. Her leadership was all tactics and no strategy: a condemnation of what passes for leadership in celebrity times. That window could have been used to remake the Tories, their appeal and policies and case for the union, but none of this was attempted. Instead, the Tories went for the easy route of riding on Ruth Davidson’s coattails and not attempting to detoxify the Tory brand.

What will Tory unionism do strategically? Will it champion what is now called ‘muscular unionism’ which suggests sticking the union jack on anything in Scotland with UK Government backing – Faslane anyone? Or will it embrace ‘ambivalent unionism’ and try and talk about things other than the union? Will it be fundamentalist or gradualist?

Even to ask this is to pose the scale of the problem. The Scottish Tories have been in trouble for sixty years. The Tories here cannot be the sole answer, for like Scottish Labour they cannot reform the union on their own. Hanging over their heads, they have the albatross of the Westminster Tory take on the union – a more enduring and entrenched issue than the inadequacies of Boris Johnson’s leadership.

Look at the state of the Tory, Labour and Lib Dem parties. All are depleted of resources, energy and ideas. All are leaderless and lacking visibility and credibility. Richard Leonard and Willie Rennie are decent folk but are not national leaders.

What unites the three parties of the ‘Better Together’ coalition is their mutual bewilderment at the state of our politics and the landscape they see before them. They can barely comprehend the situation which feeds into how they respond.

All three stand not just against independence – which would be expected – but resolutely and inflexibly against Scotland’s right to decide its own future. This is to turn their faces against democracy which is a disastrous move and in step with the disaster nationalism which now characterises the British state. Worse for them, it makes the cause of independence synonymous with democracy – and gives a potent moral argument to the Yes cause.

One view is that Carlaw had to go because of his refusal to embrace the Boris Johnson agenda. He was against Brexit and making plans to lay out his opposition to the rape clause and bedroom tax, meaning that Johnson has got rid of another independent voice – just like he has in his Cabinet.

Cometh the hour cometh Douglas Ross, MP for Moray, who despite resigning from the UK Government over Dominic Cummings is seen as pro-Johnson and willing to be his man in Scotland – supported by Ruth Davidson deputising for him in the Scottish Parliament until next May. The mantle of being Boris Johnson’s man in Scotland isn’t going to work well and will be a tough moniker to throw off.

The crisis of Toryism and unionism will continue because the union is in crisis, and Britain – its economy, society and democracy – fails the vast majority of citizens up and down the country. Every aspect of Tory politics exasperates and makes worse these crises and the hardship, insecurities and difficulties people face. Labour people like to shy away from this basic truism but Britain is at its heart still an Empire State: one which is about living in the past, remembering wars and conquests, and seeing the UK and modern world through this prism.

This is a huge opportunity for independence – but while schadenfreuden is a natural response, it is not enough. It is not all going to be easy from now on. Hard work is needed on independence, more detail, plans and honesty, along with embracing a language and tone to use to win over those still unconvinced. Alongside this there are the bubbling tensions and frustrations in the SNP and wider Yes movement.

Scotland needs a grown-up politics. Independence could help aid that by engendering a mature politics of the centre-right – as well as the centre-left and other radical voices – all separate from the constitutional question. But to do so we have to navigate from where we are now. We have to nurture the seedlings of that grown-up politics of detail, honesty and generosity today in the womb of the union. That will be tough for some but has to be done in the here and now and not be put off to that moment in the future of Independence Day One.