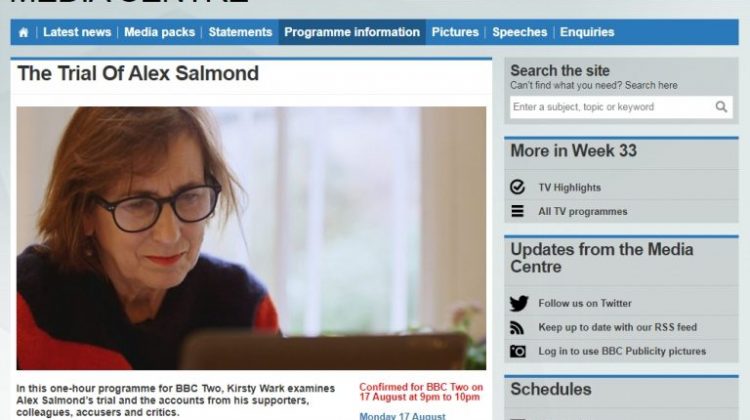 Alex Salmond is one of the towering figures of post-war Scottish politics – a politician who dramatically changed the country and his party’s fortunes, taking it into office in 2007, winning majority government in 2011, and taking Scotland close to independence in the 2014 referendum.

He has always been a divisive figure: loved by some, hated by others. This division has become increasingly bitter in the aftermath of the trial in March of this year in which he was charged and acquitted on allegations of sexual assault and inappropriate behaviour; this following his victory in January of the previous year when he took the Scottish Government to court.

All of this could have been the story that dominated Scotland and our politics this year, whereas since his acquittal it has been effectively buried due to the COVID-19 disaster. That is now beginning to change with the broadcast of ‘The Trial of Alex Salmond’ on Monday on BBC Two and on Tuesday ‘Scotland’s Uncivil War’ on BBC Radio 4, followed by the beginning of the Holyrood inquiry into the original Scottish Government investigation.

The BBC programme fronted by Kirsty Wark documented Salmond’s marmite character and behaviour. This story has many layers, minefields and potential consequences. The trial took place because of alleged actions of Alex Salmond that were viewed as criminal by the authorities, and within the context of what is deemed acceptable in the office of First Minister and other prominent positions in public life.

Adding fuel to the fire is the collapse of the Salmond-Sturgeon partnership which defined and dominated the SNP and Scottish politics for a decade: from his second coming as leader in 2004 when she stood aside for him and became his deputy. They proved a formidable force – taking the SNP into office in 2007 when the party won, what seems almost difficult to grasp now, its first ever nationwide election, then the 2011 landslide, followed by the 2014 referendum.

Since those heady days in the summer and autumn of 2014 their closely bound political double act has slowly and inexorably unravelled. Salmond felt left out in the cold by the new Sturgeon leadership. After years of mentoring her and supporting her rise he felt he deserved some respect. Sturgeon felt that she was due the space and right to develop her own agenda and leadership. The fissures between them became personal and political, seen in his pushing post-Brexit vote for Sturgeon to make more progress and be more assertive on the right to hold indyref2 and challenge Westminster government and authority. This divide mirrors wider divisions in the SNP and independence opinion, and has the potential to be explosive.

A couple of side issues are worth pointing out. The choice of Kirsty Wark to front this programme was questionable. She has form with the former First Minister; the dislike between the two being mutual and obvious. Wark is a respected journalist with a proven track record. No one would doubt that. But on Scotland, Salmond and independence she has shown where her sympathies sit and they are with Labour and the union. It did not seem a very wise decision to get Wark to front this programme knowing it would be examined for even the slightest biases.

Even pre-broadcast Wark took to the media talking about the potential for civil war in the SNP – hardly subtle and following famous BBC ‘balance’. She wrote in The Times on Friday past of the divide between Sturgeon and Salmond: ‘If it explodes into civil war, it could derail Scotland’s governing party and thus change the political future of the United Kingdom. The stakes are huge.’

I was asked on three separate occasions to be interviewed on the programme. I declined. One fundamental was that in the biggest political trial in recent decades I was invited to put my thoughts on camera before the trial had begun and thus not knowing whether Salmond would be found guilty or acquitted. This is not that unusual in TV documentaries but in a trial of this magnitude it is asking commentators, acting as quasi-witnesses to jump one way or another – or to hedge their bets.

The programme put Wark centre of the story. We had Wark interviewing or talking to herself – with close-ups of her face, hands, and of her sitting in her Glasgow kitchen ruminating on the Salmond saga. Many in Scotland’s partisan political wars will jump on Wark’s Labour ties and history with Salmond and think it is proof of BBC bias. But there is more going on.

BBC senior management regularly across the UK undermine the ethos of public service broadcasting and the journalists in the corporation who have integrity and are trying to do a good job. They consistently show craven cowardice and a lack of responsibility when dealing with the egos of talents like Wark. This is then magnified by the BBC’s commissioning which outsourced the programme to Wark and her husband Alan Clement’s company Two Rivers Media. If such a poor programme had been made inhouse a BBC producer would likely have been asked to recut it before it was signed off; such complexities demean a serious issue and all the participants.

The story is not yet over

The aftershocks of the Salmond trial matter for government, the SNP, independence, and more. It is about the standards we expect of senior public figures, and even how we make sense of what those standards are. We cannot get away from the issue of men and power in this, and of very prominent older men dealing with women often much younger than them in interactions which are not defined by equality but rather by one (Salmond) having more power than the female colleagues he was dealing with.

How do we assess and agree what is appropriate in behaviour by powerful men when it comes to a divisive figure like Salmond? Some seem to think we should not even ask the question. Some think he should be exonerated and invited if he chooses to re-enter public life. Others think he is tainted forever and has to remain a pariah. At the minimum we should at least have the courage to openly debate this sensitive subject and confront the behaviour we expect from those in public life. Too many see this issue boil down to whether they are pro or anti-Salmond.

Such an approach is inadequate to deal with the claims and counter-claims of sexual assault allegations, the complaints of a range of women against Salmond none of whom were believed to have passed the legal threshold by the jury in March. Scotland has not exactly had an enlightened record and past on a lot of this. We have for too long had a culture of abusive masculinity, with a small minority carrying out destructive, violent behaviour on others and often themselves. We have tolerated a culture of male violence for way too long in too many places, and which only in the past decade have people felt the confidence to speak up about: the work of the Scottish Violence Reduction Unit being one pioneering example.

The broken Salmond-Sturgeon relationship will have consequences for the future direction of the SNP. Salmond embodied an expansive kind of leadership which brought people in and took risks: hence we ended up with the 2007 and 2011 victories and 2014 referendum. Sturgeon’s style of leadership has always been different, being a woman and sixteen years younger than Salmond being a factor. So does inheriting the mantle of the top job as the SNP sat as the dominant party of the land and able to dismiss time and again all its opponents could throw at it.

Sturgeon’s style was always one of caution, but this was magnified by the breadth of popularity she inherited and built upon. Her leadership from the 2015 tsunami where the party won 56 out of 59 of Scotland’s Westminster seats was akin to trying to carry a fragile vase across a very slippery floor – getting from one side of the room to the other while trying not to lose your balance.

Added to this has been the ascent of what can only be called court politics with Sturgeon running government and the party with decision-making concentrated in a few hands – namely her own and husband, Peter Murrell, who has been Chief Executive for the past twenty years. This concentration of power has hampered her leadership and quality of decisions, and damaged government and party. It has contributed to a growing centralisation of power sitting alongside command and control style politics which draws parallels with the high point of New Labour in office and which contributed to its downfall.

Neither BBC programme interviewed Salmond who has held his fire since the March verdict. This caused problems and made them strange and unbalanced in their assessment. We will in the future hear from the former First Minister and his belief that he was the victim of an orchestrated ‘conspiracy’ which went to the top echelons of the Scottish Government, and to some of his supporters involved the current First Minister. Whatever the case this story has not yet reached its conclusion and has much drama left in it: one which will produce further headlines and the opportunity for better programmes.

None of the big questions raised in the trial or relating to Alex Salmond and Nicola Sturgeon had any light shone on them by the Two Rivers programme. It would be something positive if ‘The Trial of Alex Salmond’ were the last of this kind of genre, but it won’t be, and we will need a revolution in BBC senior management in Scotland and the UK if eventually we are to call time on such programmes. Many people continually lament at the state of politics, but what the above has shown is that we need to bring change not just to our political world, but media, public life and how we scrutinise those who have power and influence.