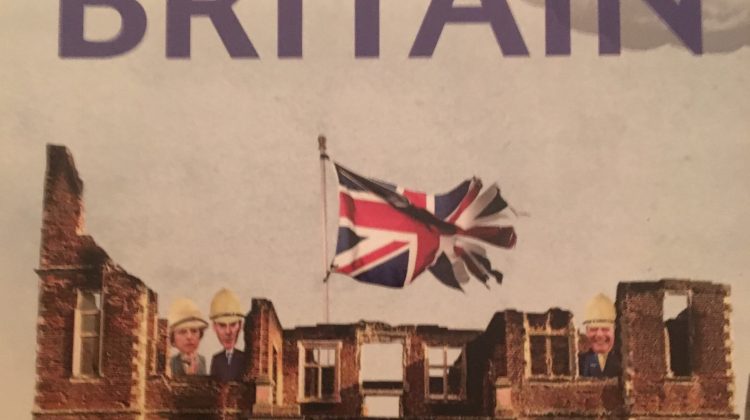 The Brexit power grab and the collapse of British conservatism

In the midst of a pandemic and the prospect of No Deal Brexit the UK Government continues its path of self-harm and self-destruction – with a central place given to the UK internal market bill.

Such is the normalisation of irresponsible uber-right-wing politics, aided by the long-term ratchet effect of Brexit, that this watershed bill – tearing up legal agreements and trashing the UK’s reputation further – that was once much commented upon now is taken as the norm. When the UK internal market bill received its third reading in the Commons on Tuesday evening with a comfortable government majority of 84 – it barely got a mention on all the main UK TV broadcasters and their news bulletins: BBC, ITV, SKY News.

The UK internal market bill lays out a path of destruction for the UK. It goes back on the Brexit Withdrawal Agreement only agreed between the UK Government and EU in October last year, and voted on by the UK Commons in January. It was this agreement that Boris Johnson called ‘a great deal’ and won him a mandate at the 2019 UK election.

This runs a horse and cart through the Northern Irish peace process and Good Friday Agreement with its completely cavalier attitude to Northern Ireland and the issue of the border. As well as this, it disregards the wishes of the Scottish, Welsh and Northern Irish administrations on Brexit which points to a chasm at the heart of the union. Westminster has attempted to present Brexit as a power surge to the devolved governments, but the internal market bill explicitly extends the power of Westminster over Scotland – and areas which are devolved.

If this were not enough, the UK Government has openly admitted to Parliament that this bill gives them the right to break international law – and to hold the rule of law and honouring previously binding international agreements in open contempt. This is shocking in its hubris and a new low in the descent of the United Kingdom, and Conservatism – the last of which used to pride itself on its upholding of the rule of law.

This is how a dysfunctional political system, over-centralised and characterised at the heart of the British state by corporate capture, becomes completely and irredeemably broken. Right-wing conservatism has now morphed into unashamed right-wing populism. It is focused on manipulating politics, government and public agencies for uber-partisan advantage, distributing huge public contracts to Tory and Brexit friends, and an even more systematic corporate handover of core public services such as the NHS track and trace in England.

Underlying and informing these dynamics is an inexorable bastardisation of British conservatism aided by a number of long-term factors. First, is the obsession with an indivisible, undiluted sovereignty which is mythical and unattainable but has in the past four years informed a purist Brexit happy to burn all the UK’s bridges with the EU. This absolutist interpretation of sovereignty has a long tradition in English political thought. It is associated with significant humiliations of the British state and empire, such as the loss of the American colonies in 1775-6 and Ireland in 1918-21. Long thought dead in the post-1945 era, this formed a potent strand in Thatcherism and has come back with a vengeance with Brexit.

Second, related to this, but a distinct strand in itself, is the hyper-individualism that is suspicious of any more than the minimal state of the early 19th century: ‘the night-watchman state’ setting the rules and directions and doing little more than defence and foreign affairs. This mindset has a remorseless critique of all things about government and public bureaucracy and has been nurtured in the recesses of Thatcherite dogma to present a determinist, caricatured idea of human behaviour based on the sovereign self and each of us being autonomous and self-determining. It has found a new fury on Tory backbenches due to the scale of restrictions with the COVID-19 pandemic.

Third, reinforcing both of these is a new found confident British exceptionalism which believes that Britain was the centre of the world’s greatest insights and wisdoms. Right-wingers talk this language as effortlessly as the air they breathe and then get annoyed at critics calling it British exceptionalism. Yet, such a perspective has been centre-stage in Brexit and as the UK Government has tried to emolliate its critics on COVID-19. Boris Johnson at last week’s PMQs stated that the UK invented ‘democracy’ and ‘freedom’ and gave these ideas to the world. Expect to see more of this preposterous assertion of ‘British values’ as Johnson continues to presides over a humanitarian debacle with the pandemic.

Fourth, all of the above are talked about as being about Britain, but increasingly this is an English agenda, politics and ideology. Indeed, the great political writer and thinker Bernard Crick once described the caricatured, disastrous version of sovereignty promoted by the Tories as ‘an English ideology’.

England has been forced to emerge as a distinct political space – given the limits to UK Government action on COVID-19 in relation to Scotland, Wales and Northern Ireland. This causes huge tensions in the above strands. What point is there in dreaming of being omnipotent domestically, when your writ stops at the Scottish and Welsh borders on most public services? Increasingly, this is dealt with by a language of the union which is increasingly aggressive and dismissive of Scotland, Wales and Northern Ireland, and has reduced the union in Tories and unionists across the nations to a transactional nationalism of public subsidy by the centre. This begs the question of how long right-wing Tories will be prepared to go along with such an approach?

Talking about Scotland is now increasingly problematic for English Tory unionists. There is mounting survey evidence that Tory members and voters are not too bothered about whether Scotland becomes independent, but that decay has yet to fully inform the top Tory echelons.

Take Sasha Swire’s recent published Tory diaries. She is the wife of Hugo Swire, Tory MP from 2001-19, with the two of them close intimates of the Cameron and Osborne set. She writes of antics during the last days of the referendum – ‘David was apparently on the floor with worry during that last week, and on the night muddled through with plenty of gallows humour. There were times when he thought he was a goner.’

She goes on to try to convey why posh English based Tories think Scotland matters and offers the following vignette about her husband Hugo:

I think what really tilted him over the edge was the thought that the Scots might reclaim their forests and moors as their own playgrounds. H doesn’t seem to understand that, despite his lineage being overwhelmingly Scottish, he is also a member of a political tribe that, according to the Scots, bled their country, particularly the shipbuilding and mining industries.

Tories have lost Scotland – in that they have lost a language and way of understanding the modern country that we are. They know that collective memories of countryside Tories hunting and shooting jar, and they also know the overhang of the shadows of the 1980s. That is a fundamental and far-reaching transformation in their place and power with long-term consequences.

The UK internal market bill, Boris Johnson’s government and the direction of the Tories in the short and longer term, is a threat to Scotland’s autonomy. How we collectively respond to this will define a large part of the contour of our future politics.

Scotland and the independence movement has to be firm, united, principled and democratic. We have to remain firmly rooted in a politics of legality and not fall for the myth that there are some easy and unspecified painless escape routes which bring about independence.

Independence has become normal, the mainstream and the majority. That requires a politics and approach which rises to the historic occasion. That means the Scottish Government and SNP should have a leading role and be a key part of the leadership. But such a politics cannot just be about the Scottish Government, SNP and Nicola Sturgeon. A campaign for self-government and self-respect which asserts Scotland’s democratic and moral right to rule ourselves has to be based on a politics of democracy and morality – practicing it, embodying it and living it. That makes independence even more than normal, it makes it real and something we act on and do.