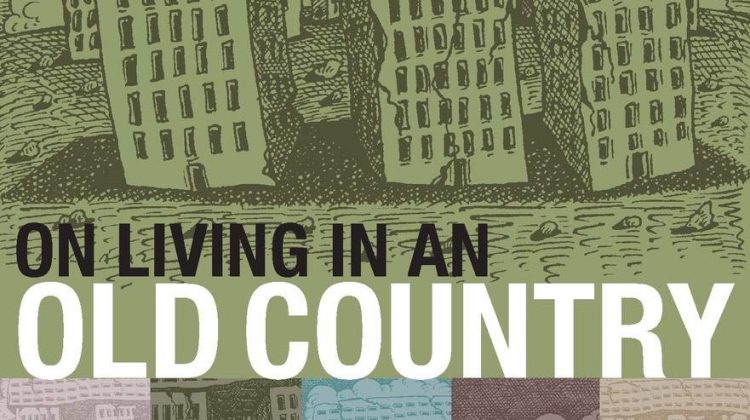 The Empire Strikes Back: Being Prisoners of the Past in Britain

Next week sees another historical milestone with the commemoration of VE (Victory in Europe) Day on 8 May – the 75th anniversary of the defeat of fascism and Nazism in Europe.

Such totemic dates seem to come around more regularly and be marked in increasingly high-profile ways. Whether the 75th anniversary of D-Day last year, marking the Battle of Britain, or numerous films about the Dunkirk debacle, the Second World War is always with us. And this without mentioning the Churchill industry – or alternative variants such as Captain Tom Moore, aged 100, raising money for the NHS, and uniting left and right.

Britain’s obsession with the past never used to be so pronounced and comes at an increasing cost. It says something damning about the state of present day Britain and its future choices.

The power of the past has consequences. The writer J.H. Plumb said that the past is ‘always a created ideology with a purpose, designed to control individuals, or motivate societies, or inspire classes.’

This invoking of the past can be seen in the enduring fascination with World War Two. Yet this has not always been presented in the same way. In the immediate decades after the war – from approximately 1945-75 – the war was presented in a serious, sober way mainly because the sacrifice involved was so great and recent, and many veterans were still alive. This meant great care was taken to differentiate between Germans and Nazis and retorts to overt xenophobia and racism were kept to a minimum and out of the press.

It is true that in this Britain the memory of the war hung over everything – and that lots of younger and radical voices wanted to rebel against it. Some thought the death of Churchill in 1965 heralded the end of an era and the chance for Britain to become a younger country. Connected to this, a rising generation of cultural voices kicked against these strictures – and against their elders. This could be seen in films such as Lindsay Anderson’s ‘If’, the comedy of ‘Monty Python’ – and John Cleese in ‘Fawlty Towers’ with ‘Don’t mention the war’.

Despite this the war did not go away; instead it became re-invented. Central was the election of Thatcher in 1979, the Falklands War in 1982, and her embracing of a Churchillian war rhetoric in that conflict and afterwards. This nationalistic fervour was aided and abetted by the right-wing tabloids who stoked the flames of anti-foreigner sentiment, and in particular, played up anti-Europeanism and German caricatures.

Patrick Wright, author of ‘On Living in an Old Country’, first published in 1985, tried to make sense of this then. From the vantage point of today, he sees Thatcherism as articulating a ‘Back to the Future’ politics with its ‘promises of national rebirth and, indeed, of renewed continuity with a British way of life considered to have been interrupted and, in some versions, defiled by post-war social democracy.’

A critical element in this remaking of the war was allowing it to be recreated as a fictitious creation devoid of nuance and free from facts. Hence the diligence of the earlier era was now absent, and it was seen as fair game to equate all Germans with the Nazis – a trope that was to get numerous right-wing Tory politicians into trouble, and which ultimately prepared the ground for Brexit.

This reinvention involves telling partial stories. Hence, the story of Dunkirk is filled with pathos and admiration for the bravery of British (and French) soldiers who escaped. But what is missing is this was a humiliation and defeat waiting to happen, considering the incompetence of the British ruling class.

Dunkirk is a human story – and a class story. One where the British generals were still shaped by First World War thinking. It is also a story about power and self-censorship with the human story of the disaster, and the anger and dismay that rank and file British soldiers felt at the generals visceral; this mismatch between the official and real sentiment being the motivation that made Harold Evans, the great ‘Times’ editor, want to become a journalist.

There is the Battle of Britain and the Blitz. The Scottish-based historian Angus Calder wrote ‘The Myth of the Blitz’ which argued not that the Blitz did not happen, but had become part of a selective narrative: ‘I now regard the ‘Myth of the Blitz’ as a ‘fact’, from the past, which like (say) the Myth of the English Gentleman’ can be discussed quite coolly’, but feeds into pre-existing dominant ideas of Englishness and Britishness.

The invoking of 1940 and the Blitz has been used for all sorts. Patrick Wright notes: ‘In the revivalist fables of the eighties the enemy was the post-war peace. (“In 1945 the Luftwaffe stopped bombing Britain.  Five years later the Blitz began”, said Saatchi and Saatchi’s poster for the V&A’s 1989 exhibition of Prince Charles’s “A Vision of Britain.”’

All of this is not just about World War Two. The past is everywhere. It can be seen in frequent referencing of past military moments, from Trafalgar and Waterloo to the Spanish Armada. Being light-footed on detail is often a plus, with Lucy Worsley in ‘Royal History’s Biggest Fibs’ calling the defeat of the Spanish Armada in 1588 ‘a founding moment of the British Empire’ – 119 years before 1707. Similarly David Dimbleby in ‘Britain and the Sea’ stated that ‘Britain’s obsession with having a strong navy’ originated in Henry VIII divorcing Catherine in 1527: 180 years before union.

The constant presence of the past isn’t just about military matters. It reaches into drama, films, TV, books and culture. It is there in the continual making of period dramas such as ‘Downton Abbey’ and the recent ‘Belgravia’ – both Julian Fellows’ creations.

It can also be found in the appeal of James Bond – a one-man British intelligence operation trying to resist British geo-political decline and defeat the forces of darkness single-handedly. Sadly the over-blown metaphors this story contains about British ingenuity have been read as literal by numerous UK Prime Ministers – from the belief in British gadgets, to the invoking of ‘soft power’, and Tony Blair’s disastrous ‘hug them close’ approach to George Bush and the US, culminating in the Iraq war.

The success of dramas like ‘Downton Abbey’ says much about modern Britain. First, they can be sold to America. This has increasingly become the packageable version of Britain which can be commodified and attract money and audiences.

Second, in a society characterised by inequality, insecurity and status anxiety, the simple, familiar world of ‘them’ and ‘us’, upstairs and downstairs, makes sense while also having an element of reassurance, in that – unlike today – everyone knows their place.

The power of this selective past is directly linked to a host of political and social changes that go beyond the reactionary radicalism of Thatcherism and its use of the past.

Labour’s failure to break out of its own conservatism has increasingly seen it become a force facing and invoking its own past – the hagiography of Keir Hardie, the folklore of 1945, and eulogising of Clement Attlee. All of these have come more to the fore as the party’s focus on the future has declined.

These regressions do not just relate to how politics is undertaken, but how culture is presented, packaged and consumed – in the rise from the 1980s of the heritage industry, the appeal of the country house, and even in the surge of ‘retro-nostalgia’ in popular music and culture.

One unapologetic account on this is Dominic Sandbrook’s cultural landscape of Britain, ‘The Great British Dream Factory’. For him, what counts as culture has to pass one critical threshold – it has to be commercially successful – which allows him to ignore most radical and original voices (with on this logic Elton John becoming the most important British musical figure of the 1970s, ahead of David Bowie).

Even more telling is that Sandbrook’s cultural Britain is really only an account of England – and southern middle class England at that. Missing is most of the North of England, Scotland, Wales and Northern Ireland. How is it possible for anyone to write such a cultural take without one reference to the Edinburgh Festival Fringe – or Northern Ireland and ‘the troubles’?

All of this reinforces the dwindling of any notion of Britain as future facing, progressive and outward looking. This may be surprising to some but this wasn’t always so – indicating how far the UK has fallen and the seriousness of the situation.

In the 1960s Harold Wilson’s ‘white heat of technology’ and the swagger of ‘the swinging sixties’ were underpinned by real social advances: rising working class prosperity, greater chances for the younger generation, and widening educational opportunities.

Post-1945, the Attlee Government embarked upon the creation of the NHS and welfare state, nationalised public utilities, and established full employment, with these achievements lasting decades and being accepted by the Tories. This was rooted in the belief that collective change advanced by the labour movement could bring about an enlightened, fairer and better future which would overcome the worst injustices of capitalism.

Today an equivalent contemporary progressive politics and belief in shaping a future that is attainable seems as far off as it ever has been. We are now at least two generations from the Wilson era, and subsequently, the horizons of the British left have diminished with the passing of time, with no sign yet of any revival of their fortunes. The future seems a foreign country to Labour and the left; and henceforth the past a familiar world that many radicals seem content to inhabit.

The idea of Britain as living in an old country, where the future is postponed and off limits as a better place, comes at an inordinate price to politics, society and the lives of millions of us.

This is not just about Tories and their obvious reactionary nature. It is about Labour and its seismic failures. It is about the limitations of Lib Dems and constitutional reformers. And it is about the retreat of popular culture and the belief of artists, writers and cultural practitioners that they can shake the status quo and challenge conventional wisdom.

Pivotal to the return of the past is fawning over privilege, excess wealth and the grotesquely rich. In this Labour has continually failed to attack concentrated power, privilege and inequality despite thirty years of post-war Labour Governments – not once for example considering abolishing private education.

Underlying this Labour and the left, in particular in England, have never been able to talk with confidence about ‘the nation’. Rather they have instead tried to invoke an abstract ‘people’, thus leaving in England the entire terrain of ‘the nation’ to that of the right – a road leading directly from Thatcher to Nigel Farage and Brexit.

We are living in an age where the Empire struck back – or rather the fabricated idea of a ‘good’ Empire. Meanwhile forces of the centre-left have tried to accommodate themselves increasingly to these harsh climes – of the British state as an Empire State. This is not focused, as in the current pandemic on the wellbeing of its citizens, but instead underneath is a warfare state obsessed with defining itself in military metaphors and yearning for the certainties and clarity of military thinking.

The only way to break out of being prisoners of the past is to dismantle the entire structure of the British state, and let the nations and peoples of these isles find a different set of arrangements and futures – one in which England in particular finally becomes a modern country and democracy.