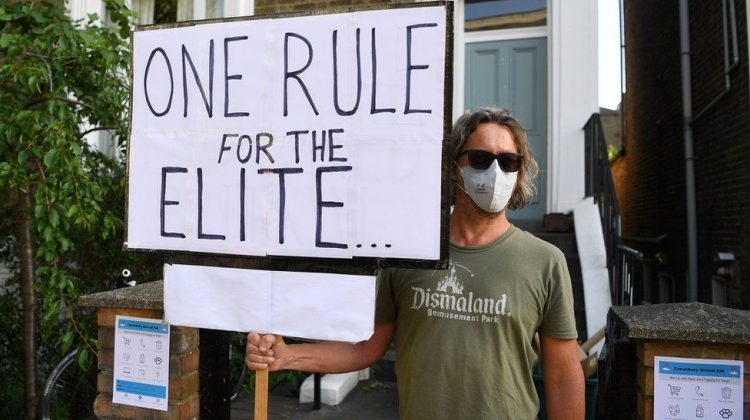 The long road down: The failures of British government have brought us to Dominic Cummings

The past week in British politics has been dominated by one story alone: Boris Johnson’s senior adviser Dominic Cummings and the extent to which he broke lockdown rules and flouted the very restrictions he was involved in creating.

This is not a Westminster political class or bubble issue. Rather it is about a much deeper, worrisome set of processes and dynamics. These include the failures of the British state going back many decades, how it does politics domestically and geo-politically and, alongside and aiding this, the nature and character of the insider class of advisers and the view of the world that they promote.

This is a story of British government, the extension of the state over the 1945-75 period, its failures to aid economic growth, prosperity and greater equality, and the acceleration of relative economic decline in comparison with the UK’s European neighbours.

Successive governments – Macmillan, Wilson in the 1960s, Heath, Wilson in the 1970s – tried and failed at modernising government, public agencies and the economy, and never even began to systematically embark on democratisation or decentralisation. These failures led to the Thatcher and Blair revolutions that attempted to break previous gridlocks by an alliance with finance capitalism and were marked by hubris, grandiose over-promise and hype – which disguised their ultimate failure to remake the economy, state, prosperity and well-being of people.

The increasing expectations, demands and complexities of government led to the emergence of a whole class of advisers, technocrats and experts brought in to advise the state and ministers.

The first modern impetus of this was Harold Wilson’s 1964 victory and the influence of John F. Kennedy’s ‘Camelot’ – an administration filled with young, eager, supposedly idealistic men. Central to this was the remaking of the office of the Prime Minister which until this point has been weak and shaped by the idea of the PM as ‘first among equals’ – as merely one Cabinet minister amongst many with more status and standing.

Wilson created a new nexus of power at No 10 Downing Street and invented the concept of ‘special advisers’ for No 10 and ministers. This was initially filled with a sense of hope and belief in the power of enlightened government. The 1964-70 Wilson government at the onset was shaped by optimism, faith in the state, and a passion for science and technology – seen in Wilson’s phrase ‘the white heat of technology’ and high-profile projects like Concorde.

By the 1974-76 Wilson government that optimism in the state and science had gone and with it the sense that experts and advisers could refashion the world. Instead, in the case of Tony Benn as Industry then Energy minister, his advisers had become critical as a counter to the biases of the civil service who he believed wanted to thwart radical change and perpetuate an establishment presiding over decline.

Fast forward to the Thatcher and Blair eras when the changes made by Wilson were taken into overdrive. Downing Street became more powerful; the Prime Minister’s key advisers became the most powerful people in the government machine after the PM; and the civil service was weakened, marginalised and often humiliated.

Both Thatcher and Blair saw due process and the independent advice of a supposedly ‘neutral’ civil service as part of the centrist consensus which had held change back. In this they agreed with Tony Benn from a previous era but for opposite reasons.

Benn had wanted openness, scrutiny and democracy; they wanted an increased concentration in a few unelected hands only answerable to them. A special adviser class arose which one Whitehall civil servant characterises as people who ‘give political advice to ministers, operate within the official space, without the constraint of impartiality.’

Thatcher and Blair were very different in many respects but both had an evangelical certainty in the righteousness of their mission – one which grew more messianic and delusional as their years in power advanced. Both presided over a deliberate collapse of cabinet government; with few important decisions being made in formal cabinet discussions in the 21 years they were cumulatively in office.

Instead, affairs of state and statecraft became reduced to bilaterals between No. 10 and ministers, between No. 10 and No. 11 under Blair, and infamously Blair’s ‘sofa government’ that led to disastrous political decisions such as the Iraq war.

The road to Dominic Cummings passes through the rise of this quasi-imperial set of aspirations in No 10. It is a desire to break free from parliamentary constraints, to remake the role of Prime Minister as something presidential, and to do so without the formal checks, balances and accountability that exist in a properly presidential system.

Max Hastings in The Times this week characterised the road from Alastair Campbell and Peter Mandelson under Blair to Dominic Cummings, stating that these were ‘clever, ruthless men who believed that ends justified the means, and made themselves almost indispensable to a Prime Minister’.

Mandelson had to resign twice from government under Blair due to scandals, yet still ended up being appointed UK EU commissioner in 2004 and brought back into government by Brown in 2008. Hastings writes directly of the lies Mandelson told him to try to save his skin and prevent his first resignation – denying that fellow minister Geoffrey Robinson had bankrolled his mortgage – and says of Mandelson and Cummings that they think ‘rules are for little people; that objective fact is a ridiculously old-fashioned concept; that a charismatic leader can create his own truth, merely by stating it often enough.’

Such a mindset is reinforced by the self-deception that such people live by: believing that they are creating a better world of progress and enlightenment. Mandelson believed the lies he was telling Max Hastings. Alastair Campbell has somehow managed to reinvent himself as a shameless paragon of wisdom, completely disconnected from the man who trashed government by process and facts, and launched the ‘dodgy dossier’ to the world over the illegal Iraq war. On Channel Four News this week, when Campbell found himself compared to Cummings, he said of his time working for Blair in Downing Street ‘I would never do anything in defiance of the law’.

It is a short jump from this to supporting Dominic Cummings as Thatcher biographer Charles Moore does, suggesting that the public mistakenly think that Cummings visited the castle in Barnard Castle ‘inhabited by grand friends, while they were miserably locked down’ and that is the cause of anger and outrage. Some with reservations see Cummings in the Downing Street rose garden as a positive – of power coming out of the darkness and into the light – Tory peer Daniel Finkelstein calling it ‘an overdue concession to reality’.

Yet this approach is completely misplaced, considering the changing nature of government and state and wider shifts in politics and leadership. First, there is the metamorphosis of the central organs of the British state in recent decades. Having resisted modernisation and democratisation they have become unapologetic advocates for corporate class capitalism and neo-liberalism.

Second, supporting this a new insider class has emerged that operates in a revolving door principle between the worlds of government and quasi-business. This new brand of adviser is often an expert in nothing but self-promotion and self-belief – and has contributed to a new growth area in government: scandals and resignations of advisers – think Damian McBride under Labour, Andy Coulson under David Cameron.

Third, the emergence of a post-truth, post-shame political leadership has encouraged a rise in authoritarianism in government. Anne Applebaum in her forthcoming study ‘Twilight of Democracy’ identifies a spectrum of such leaders and their abuses – seen at the most extreme in Viktor Orbán in Hungary and Vladimir Putin in Russia and including Trump, Bolsonaro in Brazil, Erdogan in Turkey and Boris Johnson.

It has been a long descent to Dominic Cummings and the tensions evident at the heart of government have been magnified and exploded with COVID-19. The basic lack of concern with well-being of citizens. The lack of preparedness for a pandemic or long-term planning. The fragmented state of the NHS in England after the Andrew Lansley ‘reforms’. The divide between the NHS and social care. The unwillingness of the UK Government to encourage decentralism and local initiative, clinging to the emotional crutch that the political centre knows best.

All of this is particularly true and acute in the governance of England: the last nation of the UK run without specific democratic government and still under direct rule from Whitehall. The consequences of this are that England is run as one centralised political entity while private contractors, contracting out and outsourcing are encouraged as a way of delivering public services minus accountability – an approach which has fatally stymied the handling of COVID-19.

Neal Ascherson several years ago described the British state as having become the equivalent of a ‘Serco state’ and that he believed things were different in Scotland and this was another argument for independence. Then and now his argument is right about the British state, but too complacent about the nature of government here.

The Scottish Government and public services might not have become as marketised, outsourced, fragmented and opened up to private providers as in England. But such forces are present here. And we are not as far removed from the situation in England and our defences not as secure as we would like to think they are.

Central to the right-wing project is undermining the idea, delivery and ‘public’ idea of public services. Dominic Cummings has said the state should not be involved in health or education, yet now plays a central part in the response to a pandemic including public health messaging – which he broke.

The BBC are pivotal in this ideological battle with Newsnight’s Emily Maitlis reprimanded by senior management for saying the truth that ‘Dominic Cummings broke the rules, the country can see that and it is shocked the government cannot.’ It will be ironic if Maitlis is the only person disciplined in the Cummings saga – reminiscent of post-Iraq war when the only figures held accountable were Greg Dyke and Gavyn Davies who had to resign from the BBC after the Hutton report into the death of Dr. David Kelly.

What has arisen is a system of insider trading, dealing and access as incestuous and malevolent as that of the corporate crony capitalism version it venerates. Change in this rotten system cannot come from the inside but only from outwith. The Tories are its main beneficiaries while Labour have never had the radicalism or democratic zeal to see that the British state – whether the old version or the new remade bastardised version – is the problem upholding an unequal, unjust Britain.

The only viable change is to tear down the walls of the British state and start again with a new set of relationships between the four nations and peoples of the UK. The next decade is going to be messy, bumpy and painful, but there is a good chance those walls, state and order it maintains are unsustainable.