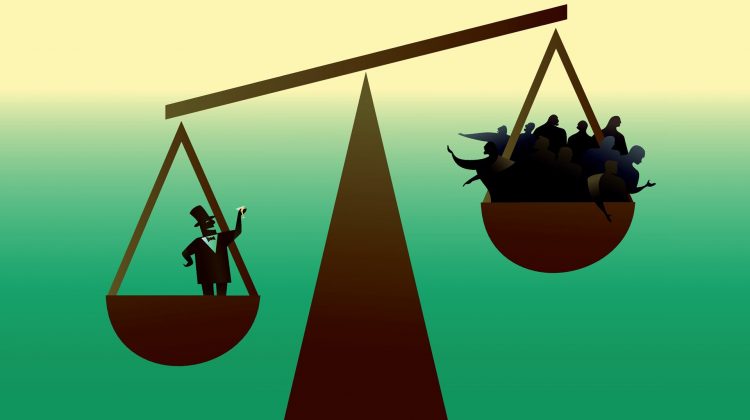 The Real Divided Scotland: Time to get serious about class and inequality

The SQA debacle has dominated the news. It is not a good moment for Scottish education or the cause of a more just, equal country. That is the bigger story here – one we should be uncomfortable with until we face up to it. Specifically, the extent of inequality and division in Scotland – this supposed land of egalitarianism.

We can see it in the education attainment gap and scale of educational inequality and apartheid which underpins it; it is evident in the huge health inequalities which scar our country; in the rising levels of child, work and pensioner poverty and much more. Then there is the other side of this equation – the concentrations of wealth and power in the professions, corporate power, land ownership, and wider ownership of housing and assets.

Scotland is less unequal than England – and mapping the two countries in the past two decades shows this consistent picture. There is also no real progress in Scotland towards greater equality. As alarmingly, for all the rhetoric and good intentions, once you remove London (one of the most unequal cities in the world) from the England figures the two countries are broadly comparable and as unequal as each other.

Even this is in many respects too sanguine about where we are and where we are going, with the effects of a decade of austerity, public spending cuts, and the limits on the Scottish Government, both in powers and ambition.

Poverty has been rising in Scotland for the past decade states Prof. Gwilym Pryce of Sheffield University observing: ‘Child poverty, working-age poverty, and pensioner poverty have all been on the rise in recent years. Projections by the Joseph Rowntree Foundation suggest that child poverty will continue to rise unless decisive action is taken. Unsurprisingly, this rise in the poverty rate goes hand in hand with a rise in income inequality.’

What can we do about this, given the enduring existence of inequality, while devolved administrations have continually professed their belief in social justice? Maybe a first step would be a comprehensive idea of social justice. One not just about poverty, widening opportunities and enhancing life chances, but also about power, status and middle class privilege and how this advantage is maintained generationally.

Scottish politics for all its lauded social democratic qualities has been wary of taking on collectively the middle class. This is a lesson bitterly learned by the Tories in the 1980s. A rates revaluation took place in 1984-85 and proposed a greater burden on the middle classes and those with more costly homes who then lobbied the Tory Scottish Office about the supposed ‘unfairness’ of it.

This then came in the form of the poll tax – implemented infamously in Scotland on 1 April 1989 one year ahead of England and Wales which led to mass non-payment and its defeat. This is one of the critical victories of left-wing Scotland against the Thatcher Government – driven by popular protest. What isn’t talked about is that all the political parties took from this was don’t mess with the middle classes or they will shout, scream and protest – in ways very different from poll tax protesters – but just as effectively. Twenty years of devolution and it has been the mantra of Labour and the SNP – unsaid, but always there.

Scotland’s affluent middle classes are able to run their own self-preservation society and closed shops. They congregate at the same schools – state or private, attend the same universities, live in the same areas and cluster in professions such as law, medicine and finance, where their collective wisdom and interests are listened too as the way of the world by governments and politicians. This continual loop of middle class influence is difficult to break.

Calling time on middle class systems of privilege would require bold government with widespread public support prepared to disrupt the status quo and norm. One educationalist says: ‘we could start by abolishing the scandal of private education, calling time on their opting out of being educated with the rest of society.’

A just Scotland would not be content with our current education system which fails our brightest working class kids while insulating the middle classes. Sue Palmer, author of ‘Toxic Childhood’ states: ‘The poverty-related attainment gap is established by the age of three. So, as well as addressing poverty, provide support for disadvantaged families before their babies are born and during the children’s early years.’ This would entail universal state services including: ‘high-quality care and education for three to seven year-olds, in the form of a relationship-centred, play-based kindergarten stage with plenty of time spent in active, social, outdoor play.’

Cathy McCulloch, co-director of the Children’s Parliament, believes incorporation of the UN Convention on the Rights of the Child into Scottish law will be an advance. She states: ‘We can’t wait any longer for adults to decide they feel disposed enough to invest more in poor communities or families who’re struggling – the welfare model stifles any ability to think differently.’ She looks to Finland for inspiration: ‘Remember the Finnish Minister of State who said ‘We realised in Finland we were in a bad way – socially and economically and we realised that the best way to build a strong society is to invest in our little children.’’

Education cannot address inequalities on its own and has to be part of an approach including tackling health inequalities, how public services work best for the middle classes, and critically, taxation, government spending and the nature of the economy. On the latter, the COVID19 pandemic provides a huge opportunity to rethink the failed economic orthodoxies which have driven governments across the globe for the past 40 years. Here the signs are not exactly positive so far in Scotland with the Economic Recovery Group advising the Scottish Government informed by the same old corporate business logic, and its chair, Benny Higgins, warning of the dangers of mainstream environmentalists such as Friends of the Earth in dismissing them as green ‘ideological zealots’.

How do we ensure that the rhetoric of ‘Build Back Better’ isn’t subsumed into such a reactionary agenda – one which has proven its shortcomings? The logic of the system – from government, politicians, corporates to media, is to duck such fundamentals, so that the basic assumptions behind the Economic Recovery Group are not challenged or even seriously debated.

Prof. Gwilym Pryce believes that tackling inequality will require comprehensive action: ‘Reducing inequality will require more than simply increasing taxation on the highest earners. There is a strong geographical dimension to poverty and inequality and this requires ambitious and coordinated measures to reduce inequalities between cities and neighbourhoods in the quality of education, access to employment, and exposure to risks such as crime and pollution.’

The psychologist Suzanne Zeedyk believes that trust and building relationships are central to change: ‘Addressing inequality in Scotland begins with creating trust. It sounds simple but it isn’t. Inequality drives distrust and division. That leaves people legitimately feeling that they are not heard and that they don’t matter, which stokes anxiety, anger and suspicion.’

This brings us to the ambition of the Scottish Government, public institutions and public bodies. This is for example where the ultimate failure of the SQA was: an inability not only to do their proper public duty, but to decide what that mission should be for children, to make it transparent, and reveal it in public long before last week.

This touches on a wider issue which progressives and independence supporters need to address: the relative absence of imaginative, well-thought out public policy. Scottish public policy has for decades been characterised by an absence of innovation and radicalism and in trying to hide this basic truism. Numerous public policy analysts have talked of the last truly radical and transformative piece of legislation as being the Social Work Act 1968 which set up children’s hearings.

The reaction amongst some SNP and independence supporters this week has been to defend the system at all costs. ‘It’s not a scandal’ declared Ruth Wishart, while John Mason, SNP MP affirmed that there was ‘lots of good news here’. This is a common trap that incumbent parties fall into after long periods of dominance and being in office. They mistake the status quo and how things are with the way things should be, and defend every policy and outcome from criticism. Radicals and those looking to change things should never make this fundamental mistake.

Similarly, those who want to paint the entire situation negatively aren’t doing anyone favours. Robin McAlpine of Common Weal made the astute point about the state of society, ‘Civic Scotland. Where are you?’. He then went on to lay the responsibility for where we are squarely on ‘the Sturgeon-Murrell’ leadership. That is just too easy and implies that the right enlightened leadership at the top of the SNP could push through the right solutions.

The current state of Scotland is a product of many influences – of ten years of austerity, twenty years of a devolution not just of limited economic powers but safety-first politics; and the over-arching centralisation of political authority which comes with setting up new devolved institutions evident under Labour and accelerated under the SNP.

There is the failure of government and public bodies to build on the energies and engagement of the independence referendum which reached out to the ‘missing million’ and ‘missing Scotland’ – the terms I invented in the indyref for our fellow citizens who had not politically engaged or seen politics as about them for a generation. We have for all the noise since 2014 failed this part of Scotland and we shouldn’t pretend otherwise. An important factor in this is the catch-all appeal of the SNP with Simon Barrow, of the beliefs and ethics think-tank Ekklesia, noting: ‘There is no tradition or language in the SNP of talking about class and power.’

The Scottish political debate has to be about more than one party winning and getting independence over the line whatever the cost. It is also about the vitality of ideas, democracy and power, and ultimately about transforming the lives of millions of Scots. This enriches independence and if it is to mean anything tangible to the ‘missing Scotland’ it has to be about real things. This debate cannot wait until after May 2021 or the day after a future independence referendum: it has to inform 2021 and any future referendum.

Entrenched elitist Scotland goes on day by day reproducing itself while too many Scots have lives blighted by hardship and poverty unable to fulfil their potential in one of the richest countries in the world. At the same time some people enjoy affluent lives of luxury and indulgence. This is 21st century Scotland twenty-one years into devolution in a country increasing detaching itself from the rest of the UK.

Writer Naomi Mitchison, a pioneer in culture, feminism and the cause of self-government, put her finger on the issue in 1953, when writing to a friend: ‘It seems to me that you are bound to assume that a self-governing Scotland is going to be immediately morally better, and I don’t see it unless there has also been a revolution’ She continued in the same vein addressing the issue of power: ‘I can’t see how the people who are likely to govern Scotland under any democratic system are going to be any different from the undoubted Scots who are in positions of local power.’

Scotland still needs those two revolutions – self-determination as a nation and as a society. The two have always been and should be intertwined.