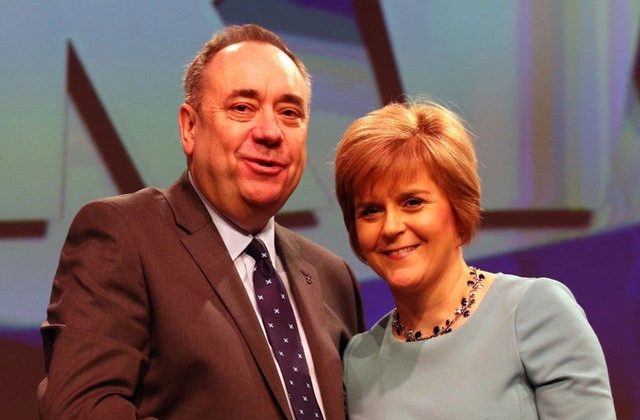 The SNP, Salmond and Sturgeon and the limits of court politics

The UK is in turbulence. The UK Government has failed us on matters of life and death. Scotland has felt very different, even if on some of the fundamentals of COVID19 it has not been actually that different.

At the same time the SNP has soared in the polls, Nicola Sturgeon’s ratings have outshone everyone else and independence has moved into the majority. To some this looks like our future – a slow disentanglement from the UK state.

Yet across the world, politics and democracy are not in a good state. It is not just the grotesque example of Trump’s America. It is also Russia, Brazil, Turkey, Hungary, Poland and many more. There is a global rise in political authoritarianism, of eroding democratic norms, weakening the rule of law, and even corruption of free and open elections.

Scotland is a benign place compared to the examples above. But nor are we completely immune from such trends. Indeed, Scotland has actually for long been a managed democracy that devolution has accelerated and strengthened. And in recent times this has on occasion begun to look like a society which has slipped into what can only be called a sort of manipulated democracy. This is not a healthy state and should set off alarm bells.

In the past week the SNP leadership altered the rules of Westminster MPs standing for the Scottish Parliament specifically to prevent Joanna Cherry, MP for Edinburgh South West, standing for Holyrood via Edinburgh Central – currently held by Ruth Davidson for the Tories – where the SNP’s Angus Robertson (who lost his seat in Moray in 2017) has also thrown his hat into the SNP ring. Robertson is the leadership’s choice, but Cherry is popular with members and may have defeated him in a party ballot. She is also a Salmond ally, an adversary of Sturgeon and was seen as a threat if she came to Holyrood.

Underpinning this is the nature of Nicola Sturgeon’s leadership. This has lots of obvious qualities – many that have been illuminated during the COVID19 pandemic – but at the same time there is growing anxiety in the SNP and elsewhere about remorseless centralisation, and command and control politics, in the party and government.

There is an obvious lack of collective leadership at the top of the party and government; there is no real cabinet government or decision making; and besides this a near total absence of party autonomy. This is clearly exacerbated by Peter Murrell, the SNP’s Chief Executive, being married to Sturgeon, hence concentrating significant power in the hands of one couple.

Added to this mix is the potential turmoil being provided by former First Minister Alex Salmond. Acquitted of all criminal charges against him in the high-profile trial and having won a case against the Scottish Government’s complaints procedures, this has rent asunder the once close, mutually supportive Salmond-Sturgeon relationship. Where once Salmond mentored and encouraged Sturgeon, he is now out for revenge.

Salmond is motivated – as are many of his supporters – to reveal the nature of a ‘conspiracy’ against him which supposedly includes the most senior levels of Scottish Government and Sturgeon herself. A Scottish Parliament inquiry may reveal some of this, as will potentially Salmond’s planned book; the publication of which has now been pushed back closer to next year’s election for maximum effect.

Connected to this is talk about a new independence party which would stand on the regional list to max pro-independence representation. The logic presented for this is often a bit muddled. Sometimes it is to help the SNP by adding list seats it would not win due to the excess number of SNP FPTP seats: ‘gaming the system’ to its advocates.

At other times it is viewed as a platform to pressure the SNP leadership which is seen as having gone soft on independence and progressing towards another referendum. And then there are others who see it as a means by which the Alex Salmond camp – and maybe even the man himself – can reek some kind of revenge as yet undefined on Nicola Sturgeon.

Not all these motives are contradictory and it is possible that some could be pursued simultaneously. But they show a degree of unclear thinking. For example, the SNP do not win many regional list seats when they do so well in FPTP seats when they are popular with voters. Yet this state of affairs is viewed as a problem by some of the more passionate independence supporters who seem in their fervour to take the success of the SNP and the electorate’s support of them for granted. What is the real motivation to stand on the list at a time and rationale when the SNP are doing well? And is trying to gerrymander a super-independence majority which could be much larger than the votes for pro-independence forces really the way to go about progressing the future of independence?

The Long Tail of the Devolution Story

There is a wider picture to this. The SNP have become the dominant party of Scotland, and embody command and control politics – where such parties often end up. This is not a healthy place in the long run – either for the SNP or Scotland more generally – and rarely, if ever, ends well.

The SNP have been in office for thirteen of the twenty-one years of devolution, and have become the party of the official story of devolution and of the political system. More than that, the path dependency of devolution – if we were to chart broad trends from 1999 to the present – would, ironing out the peaks and troughs, be broadly where it is and would expect it to be. This is a politics which trumpets its difference and autonomy from rUK, but in its actual home-grown choices made by our politics and politicians concerning who are the winners, who gains distributionally, who are the losers, and who are the insider groups is where you have predicted it to be 21 years on.

Some events from the course of the last twenty-one years might have not have expected – the ease with which the SNP won in 2007 and supplanted Labour as the party of power, or the 2011 majority victory of the SNP which produced the conditions by which the Scottish and UK Governments agreed to hold the 2014 referendum. But the broader picture is one which could have been mapped out, and the politics of devolution have articulated a politics of continuity, risk-averseness and listening to the institutional voices and players already embedded in the system.

The SNP were once the party of outsiders, local autonomy and collective leadership. But thirteen years of holding office has led to such characteristics and cultures being weakened and atrophied in the party, and on each of these the rising of a politics which is the opposite but has become the defining code and way of doing things.

Not only is the SNP a dominant party of centralisation and command and control it has increasingly become a courtier party at its centre and senior levels. This was true to an extent around Alex Salmond, but has dramatically accelerated under Nicola Sturgeon. As time has worn on in office the court of advisers, allies and sycophants has grown smaller and less representative – and more acquiescent and pliant to the views of the leadership.

The phenomenon of court politics is one political form of expression that dominant parties can adopt and is not healthy, nor is it in the long-term sustainable. One example from the recent past is that of New Labour who rose to become the electorally dominant party and became defined internally by a politics of the court and the entrenched power of a few, select voices at the centre, with eventually the rival camps of Tony Blair and Gordon Brown – once close allies -increasingly growing apart.

This is a warning for the SNP. Court politics leads to fissure and division, and produces terrible politics, infighting and years of bruises and political casualties. The Blair-Brown divide ultimately cost New Labour its political direction and confidence, and sapped it of energy, drive and ideas, leading to election defeat. The SNP are for all their dominance facing with unease and nervousness the outcome of the Sturgeon v Salmond divide – the main difference of which is that any Salmond comeback for now looks highly unlikely in the SNP.

The SNP have ended up as the dominant party expressing a sort of passive hegemony – aided by the weakness of their opponents here in Scotland and the incompetence of the UK Government. This does not leave our politics in a healthy space and leaves it bereft of asking, debating and deciding on some of the big strategic choices our society faces.

The big challenge running through all this is what kind of politics, public life and democracy does Scotland collectively stand for and champion in the early 21st century? Are the long-term trends of devolution politics really enough and adequate for the big questions we face? Is the SNP’s version of independence – presented as an extension and continuation of devolution – really the big idea, or is another version of independence possible? And who are the champions of a better politics and deeper democracy which goes beyond the critiquing of Westminster incompetence – but rather takes an honest look at our own domestic shortcomings and aims higher?

Scotland is increasingly looking (in an age where democracy is not a good place the world over) like a soft version of a manipulated democracy. One with a dominant one-party state where pluralism and debate are increasingly held in a small select number of hands. If this is the case, how do we challenge it and how do counter-forces for democracy say that this is not good enough, and aspire to rise to the occasion of the big questions of 21st century? Because if we are serious about this, we must embrace a very different, more democratic and pluralist politics – and do so sooner, rather than later.