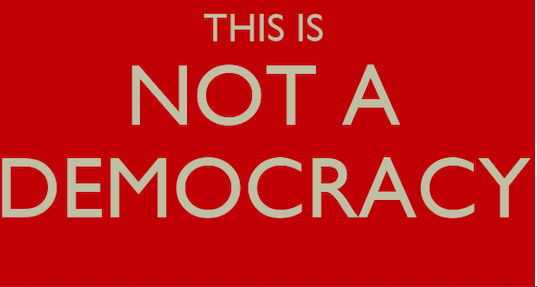 The UK is not a fully-fledged democracy: An alternative history of Britain

The events of the past few days, in the aftermath of the death of Prince Philip, have brought the nature of British society, history and democracy to the fore – or rather the all-pervasive official account that is articulated day in and day out.

We are continually told – sometimes subliminally and sometimes explicitly – that the monarchy is central to Britain, Britishness and our way of life and being, and that it is part of what makes us unique, stable and viewed enviously around the world.

Pivotal to all this is the nature of British democracy and its peaceful evolution – without revolution, rupture and upheaval – an account all of us are familiar with from our school days and culture and media. However, this amounts to a Ladybird book account of British history – simplistic, reassuring but ultimately short on real facts.

Such a story though has familiarity and well-known dates: the 1832 Reform Act, 1867 Second Reform Act, 1884 Representation of the People Act and 1885 Third Reform Act. These changed the character of Britain in the 19th century, shifting politics and power from the preserve of the aristocracy to the rising middle classes and even sections of the working classes – although only regarding men.

In 1918 and 1928 the right to vote was widened to women – the latter providing for the first time an equal franchise between men and women with voting at 21 years. In the Ladybird book account, 1928 is presented as a triumphant moment where the wisdom of Britain’s elites and in particular its Conservative Party are seen as self-evident. This is proof of the shift of the UK peacefully from allegedly an authoritarian brutal class society of despotic authority to a place of democracy, relative social harmony and consensus. And without the inconvenience of having to have a revolution like the French and Americans.

The recent story of the UK becoming a partial democracy

The trouble is that this account is a near total fiction – a partial, selective misrepresentation of British history and the British present to preserve the ossified, limited nature of democracy in the UK. As we think about the UK and what has changed and not changed over the course of Queen Elizabeth’s reign, here are some key dates which define us but which are seldom fully understood, let alone contained within such sanitised histories.

Second, 1969 witnessed the abolition of plural voting in Northern Ireland. The province still had post-1949 university constituencies (Queen’s University of Belfast) and university voting – which was overwhelmingly pro-Unionist and close to being a de facto rotten borough, as well as business voting and restrictions on Catholics voting for the Stormont elections. All of this had a tangible political effect, contributing to the one-party Unionist regime at Stormont which governed the country with a heavily manipulated democracy from 1922 until its suspension in 1972 and abolition. This grotesque regime was happily tolerated and sanctioned by Westminster and swept away in 1969 in response to a rising tide of popular pressure in Northern Ireland, instituting across the UK a mere 52 years ago – one person one vote across the UK (with the first one person one vote local elections in the province not taking place until 1973).

Third, January 1st 1983 is the unmarked, uncelebrated date when the British Empire was legally abolished. This was the result of the British Nationality Act 1981 which eliminated the concept of ‘colonies’ in British law, and instead created the term ‘British dependent territories’ for places such as the Falkland Islands, Cayman Islands and Bermuda, which were the remaining UK overseas possessions. These subsequently were renamed ‘British overseas territories’ in 2002. The term ‘colony’ is never referenced in relation to such places, but they are the last fragments of what was once a global Empire and imperial project.

Fourth, UK constitutional arrangements are filled with obscure remnants from the past such as Queen’s Consent. This is a mechanism by which the Crown is consulted and has a say on legislation deemed to directly affect their private interests. This is a very different process to Royal Assent on bills which is a formality and post-legislative stage whereas Queen’s Consent (and the related Prince’s Consent) is pre-legislative.

This is a secretive interference in decision making with, as of this year, over one thousand bills secretly vetted by the Queen and Prince Charles. In 1973 a companies’ bill which proposed corporate transparency measures was subject to Queen’s Consent which facilitated changes in the legislation so that the Queen did not need to disclose ownership of shares by the Crown. The Prince of Wales vetted three parliamentary acts which prevented tenants in the Duchy of Cornwall estate from buying their own homes. This archaic set of procedures does not just affect the Westminster Parliament, but the Scottish Parliament as well: part of the ancient system of ruling class codes which have somehow survived and limited democratic government.

As a final observation about the UK’s flawed democracy, everyone knows that the House of Lords is not elected meaning that voters only elect one half of the national legislature. This produces the ignominy of politicians that voters kick out of office or who retire from elected positions are not finished as law makers. Instead, an increasing number of them are recycled into becoming legislators for life in the Lords.

Hence, Michael Forsyth last put himself before the voters in the 1997 general election in the Stirling constituency where he was decisively rejected and last won the seat in 1992. Yet he sits in the House of Lords as Baron Forsyth of Drumlean making decisions and laws which affect all of us and sounding off on the great issues of the day, despite the fact he is accountable to no one and last had a popular mandate nearly thirty years ago.

The UK is not the country and democracy which we are told it is. Think about these facts. It took until the 1950 UK general election to conduct a contest for who would form a UK government under the auspices of one person, one vote: the basics for any society which aspires to call itself a political democracy. By this point the NHS had been established, decolonisation was under way, and the Attlee administration was supporting the idea of British nuclear weapons.

It then took until 1969 – fairly recently in terms of history – to institute one person, one vote across the UK and abolish plural voting, the unfair practices which underpinned Protestant political ascendancy in Northern Ireland and which discriminated and disenfranchised the Catholic minority. UK politicians like to live with the double pretence that Northern Ireland is both different and not different at the same time, as in the current debacle and scandal over the protocol and Boris Johnson’s deceptions. But on the belated arrival of one person, one vote across the UK, it should be noted that this indefensible previous set of arrangements was upheld by successive Westminster politicians of Labour and Conservative persuasions.

This progress of democratisation over the post-war era was not an accident, but the result of popular pressure, campaigners and the role of the Labour Party. Yet it is a story seldom told by reformers and democrats – and even by the Labour Party itself – when it should be a central pillar of its account of its successes when in office and a shining example of what it stands for at its best: the extension of democracy, civil liberties and the rule of law, and the abolition of the cosy, old vested interests and practices of privilege and elite rule.

Besides this, what does this say about Britain – particularly considering the live issue to this day of the legacy and nature of Empire – that collectively there is little understanding of when the British Empire formally ended? Why, if you are of the left-liberal tradition, is January 1st 1983 not a national day which is marked and widely known – and even one of celebration and liberation? If you do not know your own history and tell your own story then you are inviting and allowing others to tell that story for you, which is what has happened with British history.

Britain is a country defined by a fabricated, fantasy version of the past which is about reinforcing the myths that the elites of this country have our interests at heart and are filled with insight and wisdom, all of which contributes to the perpetuation of benign notions of British continuity and exceptionalism. And underneath this that we are very different from all those foreign lands with their social upheaval and revolutions.

None of this is true. Over the next few weeks in the aftermath of Prince Philip’s death we will hear more brazen deceptions. These will include that we have been blessed to live in the wonderous age of invention called ‘the second Elizabethan age’ – a phrase which Andrew Marr in his deferential adoration of tradition seems to love. It is one which is wrong on every level. Firstly, one of the central tenets of Britain from 1952 is that this most emphatically is not an age known by the name of the monarch: this is most certainly not ‘a second Elizabethan age’. Second, we never even had a first such age in Scotland so we cannot really jump to a second: a basic point that Scottish-born Andrew Marr should know.

The stories we are being told about Britain are being told us for a distinct purpose. It is not an accident that the panglossian accounts of the march of British democracy, from the likes of Peter Kellner and others, contain no reference to the belated post-war march of one person one vote and watershed dates of 1949 and 1969. Or if one looks at works by the likes of Vernon Bogdanor and what proports to be a comprehensive account of British monarchy and the constitution, they contains not one reference to the Queen’s Consent.

It is telling that no one prominent in public life over the past four decades has marked the passing of the British Empire as a legal construct in 1983: something which you would think might be seen as a tipping point: between imperial and post-imperial history. But the consequences of this silence are even more far reaching. The Empire may have disappeared as a global project and a legal framework, but it still exists as a mindset, set of attitudes and indeed set of governing arrangements in the here and now.

For the Empire State which ran the whole project was never really abolished, democratised and brought into the modern world on these shores. Until we realise this we will be trapped as prisoners of our past, while the various elites and apologists for this rotten regime perpetuate the mythology that the world still regards our constitutional arrangements as some divine creation, when increasingly they are the archaic fossils of a decaying, cobweb ridden museum. If we do not know our own history and past, can we really complain when others appropriate it and retell it for their own interests?