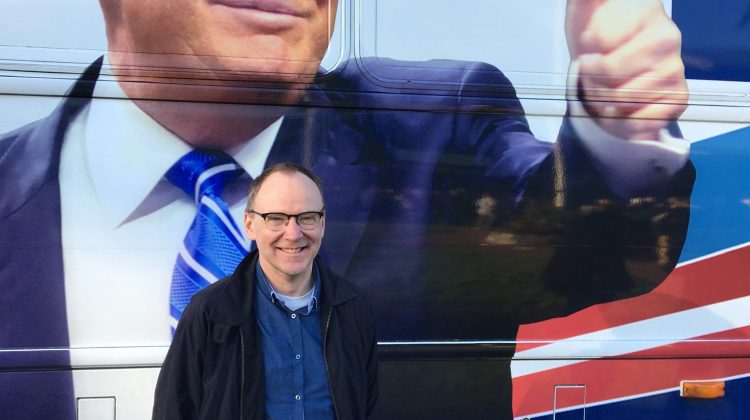 Trump and Trumpism have to be defeated

The October surprise has duly arrived in the form of Donald Trump and his wife Melania Trump testing positive for COVID-19, leading to their self-isolation and the suspension of campaigning by Trump in person.

In a year – and a Presidency of surprises – this was almost inevitable. Trump has consistently underplayed the pandemic only last month saying that it affects ‘virtually nobody.’ And he has shown a complete disregard for public safety and wearing masks, holding rallies – including his address to the Republican National Convention at the White House – where people sat in close proximity without protection.

Trump may get some sympathy for falling ill, but given his previous comments and actions these may well be short-lived and not of lasting consequence. Much more likely is that he continues in this last month before the election to throw as many toys out of the pram as possible, spreading lies and disinformation. In so doing, he is trashing public life, norms and institutions ranging from government to due process to America’s reputation at home and abroad. It is a scorched earth approach of bigotry, bitterness and scant regard for anyone but Trump and his gang’s self-preservation.

The Trump Presidency has at times seemed liked a TV reality show, no accident as Trump earned his spurs and fame on ‘The Apprentice’, creating a global media brand, and according to many commentators regarded his 2016 run as both a funder for, and expansion of his ‘Apprentice’ persona. But if this has been entertainment and about ratings (which obsess Trump) it has also been a spectacle which has been an assault on everything that came before.

This car crash Trump Presidency did not emerge from nowhere – and the damage and consequences of the past four years, even if he is restricted to one term, will not disappear when he leaves office. There will be many long-term effects of this wanton, shameless vandalism and debasement of the office of the US President.

The descent of the Republicans into a place that allowed them to see Trump as the answer is a long one. His journey through declaring for the Republican nomination in 2015, winning it in 2016, to defeating Hillary Clinton in the US Presidential election, only occurred because the Republicans had already played with toxic politics.

There have then been repeated failures by American liberals to imagine the stakes they are playing for and the threats they face from Trump and his allies. Brian Stelter wrote this week: ‘Many people didn’t believe that Trump was serious about running for office. Many, many people didn’t imagine that he could win and didn’t imagine that he would debase the office in all the ways he has.’

The descent to Trump

The simplistic right-wing populist politics of Trump has resonance in Ronald Reagan’s ascendancy when he won the Presidency in 1980. He mixed anti-governmental rhetoric with tax cuts, burgeoning deficits, and a Cold War stand-off wrapped up in folksy charm. He made enough Americans believe that they could live in a world of make believe, cutting taxes while leaving trillions of debt for future generations.

Republicanism has always had race and fears of crime at its core but in recent decades this has become more overt and unapologetic. In 1988 the Democrat Presidential candidate Michael Dukakis saw his campaign destabilised and destroyed by Republican attack ads on Willie Horton – who had been let out on parole and committed crimes including assault and rape.

Then, after Bill Clinton was elected in 1992, Republicans won the House under Newt Gingrich in 1994 and pursued an ideologically right-wing programme which saw Clinton as illegitimate and led to numerous inquiries into his actions culminating in attempted impeachment over Monica Lewinsky.

In 2000 Al Gore lost the Presidency to George W. Bush, when he was defeated in Florida by 537 votes – with thousands of voters uncounted aided by Republican Party activists in the state intimidating officials and occupying buildings. This culminated in the Bush v. Gore Supreme Court 5-4 judgement in favour of Bush which awarded him Florida by stopping the vote and hence the Presidency. Gore and the Democrats – in something which has become a pattern – accepted this result.

Trump was at the outset an outlier. He was a late convert to the Republicans having been a Democrat and at one point associated with the Reform Party – the party Ross Perot used to stand for the Presidency in 1992 and 1996. Yet the culmination of Trump winning the nomination and the Presidency has been the collusion, corruption and denigration of the Republican Party and everything it once stood for.

This is a party which is meant to be for national security but has stood appeasing Putin and Russia; a party supposedly for national intelligence that has turned its back on Russian interference in the 2016 election; it has upended the rule of law, used special security forces at home to break up protests in Portland and other cities and vilified opponents on a scale unseen since the McCarthy age.

If this mix has not been enough there has been the poison of racism, xenophobia and unapologetic bigotry. Trump has said terrible things about black Americans, Mexicans, women, and even descended to calling those serving in the American military ‘losers’.

Trump is a threat to the US constitution and democracy. This builds upon years of Republican voter suppression and cleansing electoral rolls of those unlikely to vote for the party. Under the Trumpian operation this has reached into overdrive with Republicans claiming that mail-in voting will lead to mass fraud and even more seriously Trump refusing to say he will concede defeat – even if he loses.

Trump and the threat he represents is about more than Trump

Whatever you say about Trump and his repugnant character and politics in a flawed, incoherent way he stands for something. The same could not be said with the same confidence about Joe Biden and Hillary Clinton – which is one reason why in recent decades Republicans have consistently outmanoeuvred the Democrats.

In 2016 I spent three weeks in the US covering the election, speaking to voters, supporters and going to rallies in New Hampshire – which both campaigns thought they had to win to gain the Presidency.

At a Trump rally at Atkinson Resort and Country Club in front of a nearly exclusively white, middle class, older audience, the contours of the Trump constituency were clear to see. Against a backdrop of the Rolling Stones ‘You Can’t Always Get What You Want’ played on continuous repeat, there was open hatred of Hillary Clinton. The crowd chant of ‘Lock her up’ descended to ‘Kill her’, before a lone voice audibly called out ‘execute her’ which led to one of the warm-up speakers saying from the platform ‘you have gone too far’ – an exchange which made national news.

Well before election day it was clear that Clinton’s campaign was in serious trouble. It lacked authenticity and principle and carried an obvious sense of entitlement masked as female empowerment. Like most, I thought that she would still win – albeit unconvincingly. Clinton won the popular vote but lost the Electoral College; she won New Hampshire but lost the Presidency, as Trump won ‘the rust belt’ states.

Trumpian conservatism is in part an American phenomenon drawing on the ugly side of Republicanism and dark shadow of American right-wing populism. But it has also been made possible by the decline of traditional conservatism with its love of authority, hierarchy and tradition, and these are trends seen across the developed world.

Trump is a threat and a warning. There are similarities in this post-democratic authoritarianism in Silvio Berlusconi in Italy in recent times, and Jair Bolsonaro in Brazil and Benjamin Netanyahu in Israel in the present.

Trump, Boris Johnson and the decline of conservatism

Boris Johnson is not Donald Trump but the dynamics of Brexit have given further voice to a right-wing populism waging war on institutions, invoking ‘cultural war’ with ‘the wokery’, and proposing to defend ‘British values’. This has led to a Trumpian English conservatism which builds on the worst excesses of Enoch Powell and Thatcherism but is increasingly detached from conventional Toryism as it embraces an unconstrained racism, xenophobia and destroying respected public institutions.

This trajectory of what was once the Tory Party will have profound consequences for British politics and the future of the UK. A reactionary, anger, indignant version of England will increasingly come even more to the fore on the right – and will demand a response from the left.

If the US gets Trump out of the White House the virulent forces unleashed will not suddenly go away. This raises the critical question of how should the forces of the left best respond? The centrist response of Keir Starmer, and even Nicola Sturgeon in Scotland, seem in the longer term to be more holding operations rather than resetting the wider debate. Jeremy Corbyn’s Labour briefly tapped into a popular wave but couldn’t create a sustainable popular politics of the left; the same has been true for Bernie Saunders and his support.

The question of what kind of 21st century left politics can take on the populists, build a coalition of the working and middle classes, represent labour, and draw from feminist, green, and minority constituencies, is a huge challenge for progressives across the developed world. It has to challenge corporate and tech power, make the case for democratic government, sustain living standards, and come up with an economic philosophy which has climate change at its heart. Nowhere yet has a convincing politics emerged.

We have to come up with answers soon. We are forty years since the right-wing counter-revolution began in earnest with the elections of Thatcher and Reagan. From that point the forces of the left, centre-left and social democracy have across the developed world been in retreat, accommodating and appeasing the forces of the free market leviathan and corporate capital.

Humanity faces multiple long-term crises – economic, technological, climate change and COVID-19. As well as that we have the profound disruption of Trump and other right-wing forces who want to prevent any serious debate or solutions on these and any other subjects – all to aid a broken, morally bankrupt capitalism. These forces will not stay still but rather will be looking to take the offensive in the US, UK and elsewhere waging war on regulation, standards in public life, and weakening accountability. Boris Johnson might not be a Trump, but there is much in common between Steve Bannon, former Trump strategist and Dominic Cummings, senior adviser to Johnson.

In these tumultuous times the propensity of many on the left is to cling to being cautious, respectable and show serious you are about winning. This is a recipe time and again for failure.

Trump has to be defeated and got out of office and Trumpism slain. Joe Biden may well become the next President of the USA but the political fight will be much more drawn out and carries huge risks of much more demagogic and threatening figures emerging than Trump. If Biden wins it will only be a short-term reprieve in a struggle which will decide the fate of humanity – and indeed if humanity has a future at all.