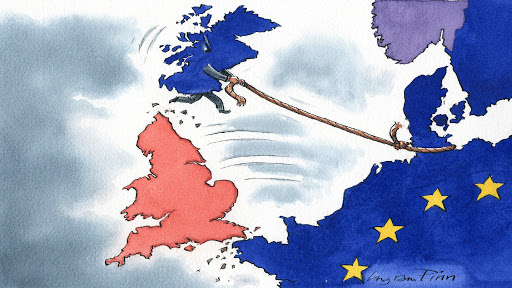 We are living through history and we are the history makers

The UK Government is convulsed in multiple crises – COVID19 and the related coming economic storm – while Brexit still remains unfinished business with a No Deal Brexit still highly likely by the end of this year.

If this were not enough, the UK is committing self-harm at the bequest of a government both rudderless and dogmatic. It is treating large parts of England like distant provinces while remembering Scotland, Wales and Northern Ireland only when they cause trouble or to keep in line.

And related to the Brexit juggernaut coming down the road, it has become public in the past week that the UK Government is planning a UK internal market bill which will have profound negative consequences for Scotland and Wales and hence impact on the nature of the UK.

This bill’s intent, according to the Financial Times, is to allow the UK Government ‘a free hand in post-Brexit trade negotiations with other countries’ and ‘highlights the far-reaching constitutional implications of leaving the EU.’ According to UK insiders it will allow the UK Government to force Scotland and Wales to have new standards imposed by Westminster across a variety of areas including food, environment and animal standards – without Scotland and Wales being properly consulted.

Europe minister Mike Russell said the Scottish Government accepted the need for ‘common frameworks’ across the UK but accused the UK Government of acting in ‘bad faith’ in proposing a statutory standardising framework for the UK internal market which would allow Westminster to ‘impose what they like’. Russell concluded that: ‘We do not accept that is a legitimate way of operating within devolution’.

This impending crisis has been building for the last few years since the 2016 Brexit vote and the UK Government’s insistence on a one size fits all Brexit – for Scotland and Wales with Northern Ireland only being given special arrangements because of the Republic of Ireland and EU’s efforts. But we have to ask whether this is the ultimate disrespect from Westminster, riding roughshod over democracy and engaging in the ultimate power grab? Or is Westminster’s bark worse than its bite, and somehow a compromise will be found? And what (if the crunch comes) can the Scottish and Welsh Governments do to oppose this?

First, the name of this bill and its contents illustrates the confusion of Westminster – being called the UK internal market bill when it excludes Northern Ireland. Dr Kirsty Hughes of the Scottish Centre on European Relations states: ‘We don’t yet know how big a stand-off is coming on common frameworks for the UK internal market – mis-named since Northern Ireland anyway will remain in the EU’s single market for goods including agricultural products.’

Second, this is only the latest Westminster example of over-reach and insensitivity. It comes after years of ignoring contributions of Scottish, Welsh and Northern Irish ministers and the atrophying of the Joint Ministerial Committee which was meant to be the way the political centre of the UK and devolved nations co-operated, and that has grown worse under Brexit and COVID19.

Third, it exposes the limits of devolution. You cannot have one-sided quasi-federalism for Scotland in a state which at its heart sees itself as a unitary state. The notion that Westminster would abolish the Scottish Parliament has always been far-fetched and isn’t going to happen. But previous Tory Governments did abolish the Northern Ireland Stormont Assembly in 1972, the Greater London Council in 1986 and the Strathclyde Region in 1996 – illustrating that Tories have a long tradition of seeing the British constitution as their own political property to do what they like with.

It is more that devolution has had two contradictory views within it. The first is the Scottish view of the sovereignty of the people espoused in ‘A Claim of Right for Scotland’ of 1988 which the Scottish Parliament agreed in 2012 and UK Parliament in 2018. The second is the view that ‘power devolved is power retained’ and that Westminster remains supreme – a position written in the Scotland Act 1998.

Prof. James Mitchell of Edinburgh University puts it: ‘While the UK Government ultimately holds more power and can simply impose its will but in doing so will only alienate Scottish public opinion further.  The absence of a devolution culture at Westminster is a large part of the problem.  The Scottish Government has remarkable levels of public support – though has to be careful not to overplay its hand.’

Fourth, this reveals what has been obvious for the past four years namely the nature of what ‘Take Back Control’ really means. Brexit is for the UK a profound constitutional moment, as observers such as Vernon Bogdanor have pointed out, which could have been used to democratise and renew British political institutions. It was never likely to happen given the conceits of leading Brexiteers, but it has turned out even worse, contributing to a degeneration of constitutional arrangements and further concentration of power in Westminster and Whitehall.

Finally, underpinning this is a version of Britain and unionism which is – as I wrote last week – going back on the traditions of unionism which once had an explicit understanding of the patchwork nature of the UK as more than greater England. The likes of Harold Macmillan and Alec Douglas Home – aided by their Scottish backgrounds – represented a Tory unionism which embodied personally and politically the UK as a union state and partnership. This pragmatic unionism, which often championed the local and ad hoc nature of the union, is close to dead.

The Scottish and Welsh Governments have indicated that they will resist this bill. Mike Russell said about Westminster that: ‘[If] they pass legislation … then we will have no intention of implementing that and they would have to essentially go to court to force its implementation.’ Welsh ministers are similarly concerned by the proposals and declared they will oppose them.

Yet if the UK Government forces the issue can it be stopped? Even if the Scots and Welsh take this to the Supreme Court will it not just expose the nature of political power in the UK? If this turns out to be the case much will depend on how voters see it and whether they think it impacts on their daily lives or is some abstract political principle about a Westminster ‘power grab’.

In short, this issue to have major political traction has to see the constitutional become about everyday life. Here there is the potential for this to become a political conflict about competing principles. On one side is a Scottish Government informed by principles of public health, scientific evidence and expert advice – as we have seen over COVID19 and such measures as the smoking ban and minimum pricing of alcohol – and a UK Government which has indicated that it has a disregard for such principles. Mitchell takes the view that: ‘The UK internal market battle is a symptom rather than a cause. The Scottish and UK Governments have very different policy preferences and visions.’

This all contributes to the state of the political mood with Scotland and England feeling in very different places. As Rafael Behr wrote in The Guardian this week, in a piece about the independence debate, English politics is in complete denial of where Scotland is writing: ‘A conflagration in Scotland might not be the next crisis to destabilise Britain, but it is in the queue. It is also unnerving how little England is prepared, when Scottish politics is a rolling rehearsal.’

This does look a watershed moment. A series of crises building on the already frail state of the union which will further lead to a deeper crisis and malaise. Alan Little, veteran BBC correspondent and Scotland watcher, put this in a longer perspective of the past four decades this week when he said: ‘I have been watching the Scottish independence movement for forty years. I cast my first vote as a teenager in the devolution referendum of 1979.’

He went on: ‘It seems to me one thing has remained constant through all of those decades and it is this – that support for devolution and now independence builds when there is a perception of Westminster imposing on Scotland policies that were rejected at the ballot box here – when the popular legitimacy of Westminster rule can be called into question.’

Is this, he asked, ‘a sit up and take notice moment?’ and concluded by suggesting that he thinks it more and more likely with each passing day that it is. One disaster scenario with a major chance of occurring is that the UK Government imposes its UK internal market bill, and on December 31st this year leaves the transition period of the EU without a trade deal resulting in a No Deal Brexit.

The signs on this latter point are mixed, as there are conflicting Brexit views at the heart of the UK Government, but there are many senior Tories and Downing Street staff with relaxed-to-positive views about such an eventuality. If those two events coalesce on top of everything else – COVID19, the economic and social turmoil, and Boris Johnson’s lackadaisical, amateur English way of being Prime Minister – then it undoubtedly will be a time to ‘sit up and take notice’.

There will be – over the next five and a half months to the end of December, and then related to next year’s Scottish Parliament elections in May, many more upheavals, shocks and surprises, as well as crises and controversies to go through and experience. There will be many moments of turmoil and turbulence in UK politics and it is not quite clear how long Boris Johnson’s premiership will last – with increasing numbers of Tory MPs in despair and dismay about the nature of his attitude, leadership and government.

Allowing for that it is now possible to imagine clearly a future political terrain emerging in which independence is increasingly seen by more and more Scots as our collective future. One of the main drivers in this has been the consistent failures of successive UK Governments and the British state – economically, socially, democratically, in matters of life and death in war and the COVID19 pandemic.

This emerging picture changes the situation in Scotland and how the public responds. We now have more need to act and think with responsibility in a strategic, serious manner about the choices we will face and the trade-offs inherent in a self-governing Scotland. We must not imagine that there are easy escape routes – such as gaming the Scottish Parliament electoral system, UDI or an unofficial referendum. Instead we need to think about the Scotland not yet convinced of the merits of independence and understand and respect it, while trying to win people over.

This point in our collective history requires leadership from all of us. Not just from Nicola Sturgeon or in having unconditional faith and loyalty in Sturgeon’s leadership. Rather it is about recognising the big picture and the stakes we are playing for. This is the start of a new chapter in our lives and that of Scotland that we can collective create and write. We are living in a time of history. One where we have the chance to be history makers. Let’s get to work to realise these possibilities and not get diverted.