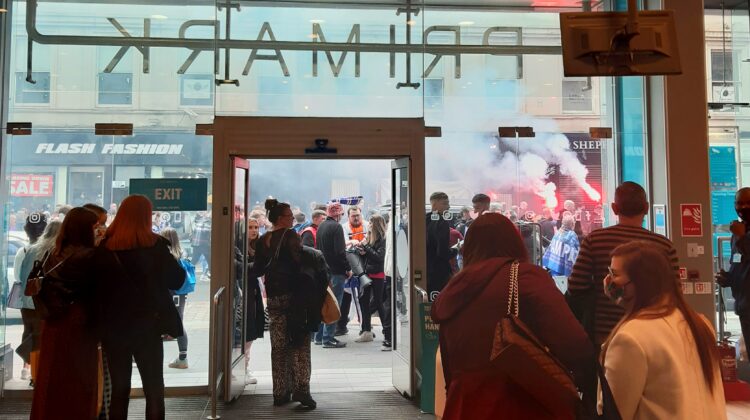 What do we do about Rangers?

Glasgow Rangers FC have returned to the top of the football game in Scotland. At the same time twice in the spate of two months a section of their fanbase (small but incredibly visible) have trashed parts of Glasgow – engaging in hooliganism, thuggery and violence in George Square and its surrounds.

What the above events show is something toxic at the heart of Rangers and a section of their support, along with wider collusion and a malaise in the football authorities. Beyond this there is a moral complicity and cowardice across Scottish society and institutions when confronted with this problem, one that may be facilitated by football but goes way beyond it.

Rangers as a ‘lost tribe’

Rangers were once the foremost football club of the dominant tradition of Scotland, but as society has changed and desecularised it has become less defined by religion and sectarianism. In the past fifty years – in employment, marriage and relationships, and the homes and communities we live in – Scotland has become less binary, more multi-cultural and multi-faith, and a place less scarred by anti-Catholic and anti-Irish prejudice than it was in the past. Yet as this has become the norm, some Rangers supporters (at least a significant section) appear to have become a lost tribe – the last pillar and remnants of a once proud, distinctive culture.

Hence the paradox over recent decades. Scotland as a society has become markedly more secular, more open and tolerant and less defined by those demons of the past. But at the same time the open wounds of a section of Rangers supporters feels and seems to be getting worse, more assertive and defiant, and more inclined on occasions to violence. All of this is in the context of the abusive chants of Rangers and Celtic fans, and the mutual co-dependency of Celtic and Rangers in ‘the Old Firm’.

Rangers are a club with a culture which feels entitled and privileged to do as it pleases and not to have to apologise or explain. A culture under threat, feeling itself under attack, even hated and despised, and in places revelling in that and wallowing in a reverse victimhood – adopting the ‘No one likes us, we don’t care’ mindset which first began with Millwall fans in the 1970s. Feeling like this means that those very privileges and the place of the club in society and its wider resonances appear under threat from every direction.

Rangers’ public statement on the weekend past was late in coming, limited and inadequate – saying that ‘a small minority of people behaved inappropriately and in a manner not reflective of our support’; that ‘some of the scenes were unacceptable and have besmirched the good name of Rangers Football Club’ and that ‘these so called “fans” should reflect upon the values and ethos of our club’ and ‘the damage this does to the reputation of the club.’

Rangers FC went into liquidation in 2012. It then endured four years of what many of their fans saw as ‘the wilderness’ – meaning the Scottish lower leagues outside the top league. It has taken ten years from their last league triumph pre-liquidation to their first post-liquidation under Steven Gerrard, which clearly indicates that they are back and have stopped the circus of Celtic and ‘Ten in a Row’.

There is more going on here than the pains that many Rangers fans felt over liquidation and ‘the journey’ back. Rangers and Celtic – the duo who have so dominated Scottish football might be able to overshadow the rest of the game here, and do so to an unprecedented degree (the last team outside of ‘the Old Firm’ who won the top league was Aberdeen in 1985), but are increasingly minnows in the context of the global game.

Rangers and Celtic’s financial footprint compared to English Premier comparators are literally not in the same league. Every year, the two Glasgow teams who, along with a host of other Scottish clubs, used to have an impressive European pedigree now struggle to keep their heads above the parapet in the Champions League and can hope at best to qualify for and then win the group stage of the second-tier trophy – the Europa League.

In this Rangers and Celtic are not exceptional. Their plight as once powerful football giants with history and tradition trying to get some kind of place near to the Big Five nations of European football is found across Europe. At club level across the continent, numerous leagues and once mighty clubs find themselves in a similarly pained position – Belgium and the Netherlands being obvious examples.

The revival of Rangers domestically

Steven Gerrard’s Rangers are a skilled team. They are near to the best any Rangers fan can realistically expect with the constraints on the club’s finances and that of the Scottish game. The journey back to the top has been an intoxicating one for fans. It has been filled with waiting, anxiety at the threat of ‘Ten in a Row’, and in the lower leagues a host of indignations, having to play in tight, packed grounds to the likes of Brechin City, Elgin City and East Stirling, and occasionally drop points or even face defeat, despite all their advantages.

Hence a section of Rangers fans this past Saturday and during the prior debacle wanted to show what this meant – that they could celebrate despite COVID, the Scottish Government and Police Scotland; indicate that what they saw as the natural order had resumed, and to take back spaces such as George Square from the nationalists who dared to claim it post-indyref.

The political dimension in this has many layers. There is the independence question. There is the ultra-loyalism of part of the Rangers supporters, some of who openly embrace the far right. And there is the anti-Catholicism and anti-Irish bigotry and racism that imbues the club’s ethos, regularly reinforced by the songs and slogans which rung out round Ibrox pre-COVID and can be seen in the recent video of players appearing to use sectarian language as they celebrated (the authenticity of which the club has questioned).

But there is also caricature on all sides about the complexities of Rangers fans who as a sizeable, diverse community cover all kinds of shades and hues. Some of the assumptions are breath-taking. On the last weekend before the 2019 UK election I spoke to a senior Scottish Tory official who told me that they were worried about polling day because a Rangers European match fell on same night and ‘they might not all get out and vote.’

I was surprised by this, and responded that ‘in today’s Scotland, not all Rangers fans are Tories or pro-union’ which seemed a revelation to him. I pointed out that there would be Rangers fans for Labour, SNP and independence, and numerous factors informed this. One was the working class or first generation middle class backgrounds of many Rangers fans and hence the perspective this brings for some. For many football fans, Rangers included, supporting their club might not be their primary identity; other identities cut across this – class, nationality, education, politics. All this came as a complete shock to this Tory who had clearly never thought for a second about the basis for his view that all Rangers fans were Tories.

The normalisation of bigotry across society

Every day we witness the normalisation of bigotry and racism. When BBC Scotland on their evening Sunday news covered George Square they presented violence versus non-violence in a bizarre ‘balance’ with one Rangers fan presenting events as ‘a bit of fresh air, a bit of alcohol’ as if this was a jolly Sunday family picnic that got a little out of hand.

The last week witnessed over the course of three days the best and worst of Glasgow all within a couple of miles on the city’s Southside – the joy and solidarity of Kenmure Street which I attended, and the anger and violence of a section of Rangers fans trashing parts of the city in which the club is located and takes great strength from.

There was denialism and whataboutery as Rangers fans tried to deflect and stonewall. Tory MSP Murdo Fraser who had condemned the Kenmure Street protestors could only after 24 hours issue the most general condemnation of violence – linked it to Gaza protests in London: ‘ALL disorder and violence against the police should be condemned, wherever it occurs – in Glasgow, London, or elsewhere – and whatever the ‘reasons’. End of.’

One comprehensive defence of Rangers and their fans came from Rangers News, an unofficial website, and from Jimmy Black who stated that he felt no shame in his club after George Square: ‘Rangers fans like myself who watched the game at home are somehow expected to be embarrassed and ashamed by the actions of complete strangers miles away on the basis of something as arbitrary as supporting the same football club.’

He then launched into the astounding argument, asking why George Square should be singled out when public spaces in Scotland are regularly trashed: ‘What happened in George Square, sadly, is seen any time there is a mass gathering in Scotland when there is alcohol involved. Kelvingrove Park is often the scene of similar when the sun is out and the carry-oots are flowing … T in the Park was a constant magnet for similar disorder while its replacement TRNSMT doesn’t exactly fare much better …’

Some Rangers fans did speak out and condemn the behaviour of supporters of the club. Lapsed supporter Jim Robertson took to Facebook to show his dismay and fury: ‘Rangers handling of this (both times their fans have trashed our city in the last month) has been a disgrace. Though sadly that’s not unexpected and why I stopped watching a long time ago. Scotland needs to root out this crap.’

What do we do with Rangers and the attitudes of not just the minority of fans who rioted in George Square, but the wider community of enablers and apologists who reinforce and make this permissible? Firstly, the cowardly denialism of the likes of Murdo Fraser and ex-Tory MSP Adam Tomkins has to be called out. Such folk have forfeited the right to lecture us on anything, and in particular, law and order, public safety and hate crime (the latter a subject Tomkins declared he was going to address post-MSP).

Secondly, one of the fundamentals running through this is the lack of accountability in Scottish football. How will the football authorities find the courage and principle to hold Rangers responsible for the actions of their fans? A token financial fine would make no difference, but a significant points deduction for next year would hit them where it hurts.

Even to raise this brings us to the poor governance of the game by the SFA and SPFL – who kowtow to the interests of the Rangers-Celtic cash cow and are also accountable to no one with the SFA running the game as a private association since it was formed in 1873. As in other areas of life – banking, politics, media – self-regulation has been shown to not work and become increasingly a self-preservation society for those with the biggest wallets, without ever pausing to think of the greater good of the game or giving second thought to the fans.

The rotten, incestuous, closed shop that is the world of the Scottish football authorities has to be called time on and a wind of change and transparency blown through its corridors and offices. Only with proper, independent regulation of the game can the world of Scottish football change, adapt and better reflect the wishes of fans up and down the country, rather than continuing to be trapped in the ancient obsessions and tribal rituals of ‘the Old Firm’.