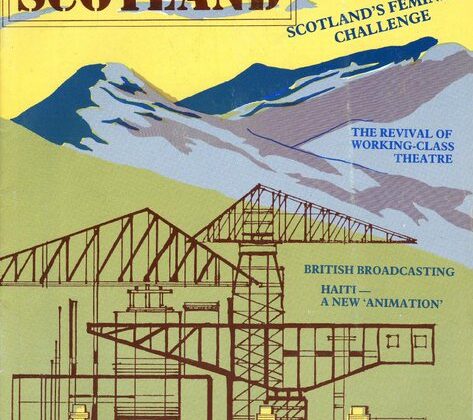 Where and who are Scotland’s radicals today?

Summer has arrived in Scotland and what passes for holidays in a pandemic  – schools formally off, the Scottish Parliament in recess, lots of staycationing, and maybe even Nicola Sturgeon feeling she is entitled to at least a short holiday.

UK politics never seems short of crisis, incident and scandal. Boris Johnson’s haphazard but so far popular Premiership is proving ill-disposed to running a country facing the twin hits of Brexit and COVID-19. Beneath the noise, charge and counter-charge Scottish and UK politics and politicians are facing huge challenges which will fundamentally shape and reshape the future of this country, UK politics – and have global impact. Here are eleven observations about Scotland and its wider political direction and future and the battle of ideas.

ONE ‘The Scottish question’ is not just about Scotland. Nor will it be solved solely by what happens in Scotland. Rather it is also about the nature of the UK and character of Britain – economically, socially, culturally, democratically – and how it feels as a place and society and is perceived in Scotland.

TWO ‘The Scottish question’ is also about more than Scottish nationalism and the appeal (or not) of the SNP. Instead it touches upon fundamental questions of the purpose of government, democracy and society, and how in the modern age citizens want to be represented and by whom.

THREE The two twin pillars of Scottish politics of the past 50 years have been that of class and nation – of social democracy and Scottish nationalism. Both are very broad-based appeals and hence not the exclusive property of any one political party or perspective. By being so all encompassing, neither are conducive to thinking about how to generate the ideas needed to define and govern an increasingly self-governing society.

FOUR Scotland has been characterised by serial dominant political parties: the Liberals in the 19th century, Labour in the late 20th century and the SNP now. All these parties became the political establishments of their day such has been their dominance. The SNP’s transition from outsider to insider party comes at a cost and has slowly atrophied the party’s political antennas and sensitivities – as it does all parties in office.

FIVE The SNP have now been the Scottish Government for fourteen years. This brings downsides in how the SNP does politics and governs, with part of its success due to the leadership of Nicola Sturgeon. Sturgeon has been in frontline politics in senior roles in the SNP for the entire 22 years of devolution which makes her an archetypal insider. If this were not enough her husband Peter Murrell has been Chief Executive of the SNP for that entire 22 years – first under Salmond, then John Swinney, then Salmond, and for the past seven years of Sturgeon as First Minister. That concentration of power and decision-making is bad for politics and bad for the SNP as a party – and is sustainable into the future.

SIX There will be no immediate indyref but this will remain a live issue and the defining topic of Scottish politics. It suits the forces of independence to wait until Boris Johnson says no or delays. Such a Westminster response – particularly if the issue ends up in the UK Supreme Court – makes the independence case synonymous with democracy and changes the nature of the union in a way which undermines the union case.

SEVEN Both pro-independence and pro-union arguments have heavy lifting to do. The independence side has to come to terms with the risks inherent in such dramatic change, and address the thorny issues: the fiscal deficit, currency and borders.

However, the pro-union corner seems reduced to a sort of ‘disaster nationalism’ – saying that Scotland would be the equivalent of a basket case bereft of Westminster subsidies. Add to that the degeneration of Tory unionism into an obsession with putting Union Jacks on everything and dragging the Royal Family – and in particular William and Kate – into the constitutional debate, and the dearth of fresh thinking is apparent. Too many on the pro-union side take succour in the difficulties for the independence argument. Rather, they should recognise that they are fighting a defensive war and one of retreat on the territory of their opponents.

EIGHT As long as Britain remains so unequal – economically and socially – and undemocratic with an atrophied political centre and unprecedented centralisation particularly in relation to England, the dynamic of Scottish independence will remain to be solved and addressed. Thus the British dimension to independence matters and has a major impact on how the Scottish dimension evolves.

NINE Labour’s lack of understanding of the British state remain major drawbacks. The recent massive Corbyn-commissioned report on reforming and democratising the British state and moving towards a more federalised Britain has been parked. Gordon Brown is on manoeuvres – supposedly setting up a UK-wide Constitutional Convention. But no one in the UK Labour Party knows anything about how it is to be organised, its basis and how it will be housed. The Corbyn report understood that one central problem is the nature of the British state; it is unlikely that Brown will have such insights.

TEN Scotland needs a credible left politics challenging the centrism of the SNP. At the moment the importance of the independence question shields the SNP from being held accountable on their domestic agenda. The nearest equivalent to a left critique of the SNP’s record comes from the Scottish Greens, but they are less critical because they are pro-independence, and limited on the politics of class and inequality.

ELEVEN We need to acknowledge the limitations of both Scottish and British nationalism, and the defensive social democracy which has defined Scotland in recent decades. None of these have the capacity on their record to address the big questions our society needs to face – economically, environmentally, technologically. But this raises the question of where and from whom are the ideas for the future Scotland to come from?

One French journalist talking to me recently about the example of Ian Hamilton and the taking of the Stone of Destiny from Westminster Abbey on Christmas eve 1950 made the following observation; when I pointed out that he had undertaken this daring enterprise at the height of unionist Scotland and Britain, he said: ‘That was a radical act then. But where are the equivalent radicals today and what are they doing?’ It is a great question and not one I had an automatic answer to. What I do think is that the radicals of today are probably not to be found defining themselves first and foremost as pro-independence or pro-union, but engaged in different kinds of politics and creative expression.

Where and what those radicals do will have critical bearing on the country we live in. Hamilton’s example of taking the Stone of Destiny is a brilliant example of how to be a troublemaker. It made a protest against the heart of the British establishment, was taken seriously at the level of the UK Cabinet and monarchy, and the symbolic nature of the act is filled with folklore and myth. It contributes to a potent story – told and retold down through the years, playing to the Scottish sense of rebels and the power of storytellers. At the end of last year Hamilton reflected to me on these events seventy years ago and the state of modern Scotland today, observing: ‘It is a very free society. My generation are handing over something so much better than we inherited. I would like to think the Stone of Destiny played a small part in that.’

A final set of observations on the long political horizon. If the Tories win the next election they will have then been in office for nineteen successive years and won nine out of the past twelve UK elections, but during this period have not won the popular vote once in Scotland – and last did at a UK general election in 1959. Yet at the same time the recent SNP victory in the Scottish election was the fourth Nationalist victory in a row – and by the end of this parliamentary term they will also have been in office for nineteen years.

Political atrophy and the laws of political gravity matter in both Scottish and UK politics but it is fairly clear from the above that British politics do not exist across the four nations, and that Scottish and English/British nationalism feed off of each other aiding the dominance of each other in Scotland and England.

The political landscape of Scotland and the UK for the foreseeable future mitigates against the asking of big questions about the challenges that society faces, but the present dispensation cannot hold out indefinitely. For all the rhetoric and positioning it is informed on both sides of the border by a conservative imagination and mindset. Eventually, post-Brexit, post-COVID, post-Boris Johnson and yes, post-Nicola Sturgeon popularity, the huge questions which face Britain and Scotland will return centrestage.

Part of that in Scotland will include addressing the self-government and independence question – which brings to the fore not only questions of the kind of future that people in Scotland want, but also questions the other nations of the UK, and the arrangements and co-operation between them. We could begin at least by preparing for that coming era, and asking who and where our radicals are who may be able to assist us in that debate.