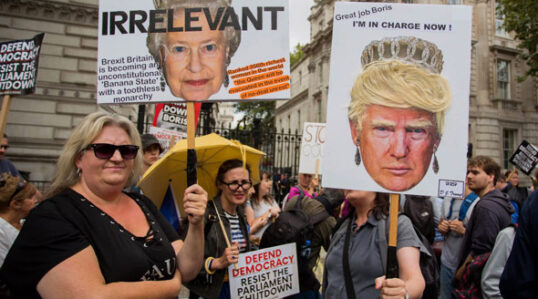 How do we talk and listen in an age of noise? Gerry Hassan Scottish Review, February 17th 2021 Scottish public life doesn’t need to look far for controversy and heat at the moment. There is the ongoing Nicola Sturgeon-Alex Salmond saga, the mess of the Scottish Parliament inquiry, the growing sense of drift in the SNP and the Scottish Government; combined with gathering authoritarianism and belief that it knows best. Added to this is a palpable lack of accountability and taking of responsibility of many in power. There is the Crown Office controversy involving Duff and Phelps, and only last

Continue Reading How do we talk and listen in an age of noise?

How do we have public conversations in the age of rage? Gerry Hassan Scottish Review, August 15th 2018 Has the world of politics and public life ever been so messed up? And at a time of global confusion, disruption and challenge when intelligent politics is more needed than ever before. British politics in the last week has seen stormy arguments over the rights and wrongs of Tory Boris Johnson and his comments about Muslim women wearing the burka. At the same time, Labour’s discomfort and problems over anti-semitism, which I wrote about last week, refuses to go away, continuing to

Continue Reading How do we have public conversations in the age of rage?

Clearing the Scottish Fog of War Gerry Hassan Sunday Mail, June 28th 2015 This has been a momentous news week. The Greek crisis; Britain and Europe; the human desperation at Calais; and the related tragedy in the Mediterranean. While this has been going on Scotland has had its own mini-ripples which pale in comparison. There was the controversy over Royal Family funding and the Crown Estate in Scotland, and at the same time, the ongoing problem of cybernat abuse and social media misbehaviour. The Royal story saw a whole range of UK papers run front-page headlines stating ‘Scotland to cancel

The Strange Death of Liberal England Continued Gerry Hassan Scottish Review, July 30th 2014 Liberal England is in a state of confusion. There is the challenge of the Scottish independence referendum, the continued right wing drift of UK politics, and the slow detachment of the UK from the European Union. All of the above cause apoplexy and dismay to the thinking elements of the English left. One response to this from people such as Labour MP John Cruddas and Billy Bragg is to try to re-ignite the English radical imagination and challenge the increasingly English nationalist overtones of Nigel

The Unions of the United Kingdom are Changing Gerry Hassan The Scotsman, October 26th 2013 This week the British media turned its attention to the christening of the Royal Baby with the headlines ‘Gorgeous George’, continued its obsessions with who said what and apologised for what in ‘Plebgate’, and allowed for an occasional airing of the issue which rocked Scotland: the potential closure of Grangemouth petrochemical plant. Such coverage shows the growing divergence between the London media and political world and the concerns of Scotland, but a small part of the thoughtful English media turned its attention to the implications

Continue Reading The Unions of the United Kingdom are Changing

A Memo to James Naughtie on his Return to Scotland Gerry Hassan Scottish Review, October 10th 2013 Dear Jim, It has come to my attention that you planning to move north to cover the independence referendum, admittedly for only two days a week. Since you last worked in Scotland in 1977 a lot has altered that you might find at first a bit bewildering. Scotland has changed, not entirely in ways immediately apparent or straightforward. Some institutions which have the same names as 36 years ago have changed, nearly totally out of recognition. New bodies and different ways of things

Scotland’s comforting stories and the missing voices of public life Gerry Hassan Scottish Review, September 24th 2013 Scotland in its politics, culture and sense of its identity likes to tell itself a comforting story. There was once a Labour Scotland optimistic story of lifting working people up, and now there is a Nationalist account about the possibilities of independence. There is even a positive pro-union version that has not been fully articulated in public for many years. All of these are partial accounts, and one of the many challenges they face is the continued existence of negative stories which emphasise

Yes to a Different Scotland Gerry Hassan Open Democracy, September 18th 2013 One year to the Scottish independence referendum. A historic milestone. A host of mainstream media programmes, discussions and items yesterday and today are marking it. One of the most important was ‘Newsnight’s’ Berwick upon Tweed programme on Tuesday broadcast to a British wide audience which looked as though it was filmed in the ‘Great British Bake Off’ tent! The programme was revealing and fascinating, from Kirsty Wark’s conspicuous slips showing her bias, to Margaret Curran, Shadow Secretary of State’s constant reciting of the word ‘separation’ in her opening

The Power of the London Scots Gerry Hassan The Scotsman, August 24th 2013 One of the most powerful group of Scottish opinion formers do not live and work in Scotland, but are the London Scots. This group are never far from the public gaze. They come into focus with the northern exodus of the London and Southern classes at Festival time, personified in Andrew Marr’s recent intervention at the Book Festival about the state of Scotland. Marr stated that, ‘There is a very strong anti-English feeling (in Scotland), everybody knows it’ and that ‘it could become toxic’. Two of his

Continue Reading The Power of the London Scots