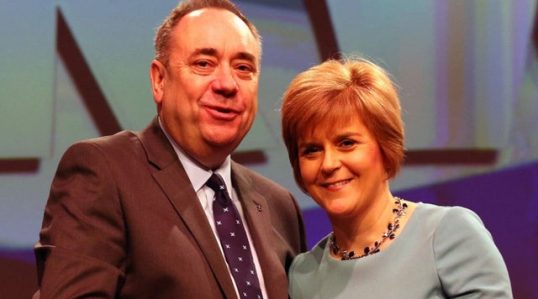 The SNP, Salmond and Sturgeon and the limits of court politics Gerry Hassan Scottish Review, August 5th 2020 The UK is in turbulence. The UK Government has failed us on matters of life and death. Scotland has felt very different, even if on some of the fundamentals of COVID19 it has not been actually that different. At the same time the SNP has soared in the polls, Nicola Sturgeon’s ratings have outshone everyone else and independence has moved into the majority. To some this looks like our future - a slow disentanglement from the UK state. Yet across the world,

Continue Reading The SNP, Salmond and Sturgeon and the limits of court politics

Where will the new ideas for Scotland’s public services come from? Gerry Hassan Scottish Review, June 19th 2019 Scotland seems to be at an uneasy, calm place at the moment. The storm clouds are gathering on the horizon yet still seem distant - from the threat of Brexit and even worse the car crash of a No Deal Brexit - to the expected arrival of Boris Johnson as Tory leader and UK PM, while alongside this the Scottish Government demands that the UK Government listens to it on Brexit, so far to no avail, and considers how to progress a

Continue Reading Where will the new ideas for Scotland’s public services come from?

Independence has to be about more than an indyref. It is a state of mind Gerry Hassan Sunday Herald, May 13th 2018 Scotland and the UK feel in hiatus and stasis - awaiting the unfurling and unraveling of Brexit. Some people are marching. Last Saturday’s gathering was significant given the lack of SNP and Scottish Green support. It shows the energy, but also frustration and impatience, in parts of independence opinion. But it also shows the limits of such a politics. Any movement that marches under banners like ‘Tory Scum Out’, and with Tommy Sheridan on the platform, isn’t

Continue Reading Independence has to be about more than an indyref. It is a state of mind

The SNP has got us where we are, but the SNP on its own isn’t enough in the future Gerry Hassan Bella Caledonia, October 12th 2016 The SNP have played a huge role in getting us to where we are today. They are central to where Scotland goes in the future - but they on their own are not enough. Without the SNP there is significant doubt that we would ever have got a Scottish Parliament. It is true that Labour legislated for it, but they were first brought back to devolution in the 1970s by the electoral threat of

Continue Reading The SNP has got us where we are, but the SNP on its own isn’t enough in the future

The Coming Scottish Revolution Gerry Hassan The Scotsman, January 22nd 2011 The appeal of the familiar. Or so it seems. Apparently Scots are in their droves returning to Scottish Labour with the latest polls predicting the party could win an overall majority in next May’s election. There are only two governing parties in this contest: Labour or SNP – either on their own, or in alliance with others, but never each other. What kind of appeal are they going to offer to Scottish voters? Scottish Labour have learnt the trials of opposition after the wobble of Wendy Alexander’s leadership, going

Back to the Future, Or Not: The Strange Rise of Scottish Labour Gerry Hassan Open Democracy, January 19th 2011 Scottish politics is away to change and not change – with according to the most recent TNS-BMRC poll – Scotland getting itself into a frenzy of excitement at the anticipation of Iain Gray’s Scottish Labour returning to office (1). The figures are worth highlighting: Labour is polling 49% of the constituency vote and 47% of the regional vote: enough to see it get an impressive 69 seats in the 129 seat Parliament and thus an overall majority. What is going on

Continue Reading Back to the Future, Or Not: The Strange Rise of Scottish Labour

Time for Next Step on SNP’s Journey Gerry Hassan The Scotsman, January 14th 2011 Scotland has experienced an interesting experiment. Four years of the first ever SNP administration, the first ever Scottish Government committed to independence. Now is surely an appropriate time to assess how much this has changed the SNP and Scotland and what the prospects for future change are? This has been a decent administration, one that in many areas has had or attempted to articulate the right instincts on a range of economic, social and cultural matters. It has felt like Scotland’s Government, our national and international

Continue Reading Time for Next Step on SNP’s Journey